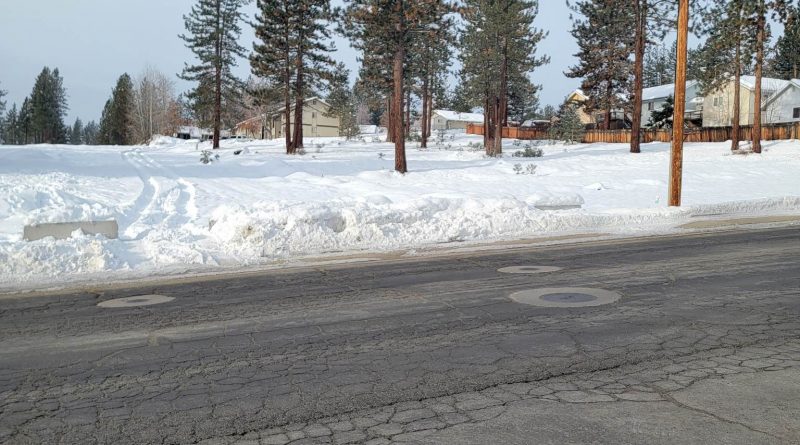 The City of Portola has shown interest in applying to buy properties in Portola, located near West and Magnolia Street. Photo by Jon Kennedy
News
December 29, 2022 Editor

At a recent meeting of the Portola City Council, members approved an application to purchase tax defaulted property from Plumas County.

The property to be purchased is the old Sierra Ridge development, located in Portola near West Road, which was a development that was approved several years ago before falling vacant during the 2008 recession and defaulting on taxes on July 1, 2009.

Interim City Manager Jon Kennedy explained during the meeting that the city has been battling with abandoned vehicles and issues with infiltration through the sewer system installed and abandoned at the property ever since. “We don’t own the property and can’t control it,” said Interim City Manager Jon Kennedy. “Knowing that, we reached out to the county to ask about it … we are a city or municipality that can purchase properties for a public purpose.”

Kennedy noted that to start, it would be about taking control of the property at a reasonable rate.

The application covers 23 properties altogether, and according to City Finance Officer Susan Scarlett, could be obtained for as low as $20,000, dependent upon approval by the Plumas County Board of Supervisors and final accounting by the tax collectors’ office.

While the city emphasized that they are not in the business of real estate, it became apparent to Scarlett and other city staff that the properties could potentially be a good step on the affordable housing front for the Eastern Plumas area.

“It’s an odd thing for us to bring this to the council, however, we found that there might be some potential for this property to at least be controlled by council and down the road possibly start to create the opportunity for affordable housing for the workforce in the community,” Kennedy said.

The purchase would be made with funds from the American Rescue Plan Act, or ARPA, which must be spent in its entirety by 2026.

Scarlett explained that the property has been up for sale twice already and is convinced that it fits a lot of the terms, being an abandoned, vacant property with a public purpose going forward in addition to removing a health and safety issue. “Early in 2022, city staff contacted the county treasurer-tax collector to discuss the possible purchase of these tax defaulted properties for a public purpose,” Scarlett noted.

During this process the State and Local Fiscal Recovery Funds (ARPA) were considered as a possibility to purchase these properties.

Scarlett went on to note that in reviewing the final rules on the funds, the purchase of these properties is a consistent and appropriate use of APRA funds.

After the submission of the application, it would go before the Plumas County Board of Supervisors, and once approved at that level it would go to the state, with a goal of wrapping up the acquisition by May 2023.