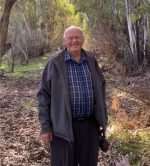 Born January 1, 1942 in Cisne, Illinois, he was the third child of Clinton and Marjorie Brown. In his early years, his family lived in Texas and Washington, and eventually settled in Fairbanks, Alaska for 20+ years. Cliff graduated high school in 1960 and further graduated from the University of Alaska Fairbanks with a Masters in Civil Engineering in 1969.

During his time at the university, Cliff met and ultimately married Judith “Bunny” Anderson in 1964.  In 1970, they left Alaska for new adventures, living in several states before settling in 1974 at what would become their new hometown of Quincy, California.  Cliff, a professional engineer and surveyor, worked for Plumas County and subsequently built his own Engineering and Surveying Business.

Cliff thrived in Quincy’s small town atmosphere, and was known by many for his generosity, big smile, and affable spirit. While raising his family in Quincy, he would actively take them on camping, canoeing, and hiking excursions to explore the region’s breathtaking scenery.

Cliff is preceded in death by his parents, Clinton and Marjorie, his wife, Judith “Bunny” Brown, and siblings Clinton Jr., David, and Marguerite. He is survived by his dear friend and companion Gloria Espinal, his five children (and their spouses): Danielle Trafton (Eric) of Huntsville, AL; Raymond Brown (Yvonne) of Gardnerville, NV; David Brown (Shauna) of Anderson, CA; Denise Johnson (Michael) of El Dorado Hills, CA; and Dale Brown (Karen) of El Dorado Hills, CA. He is also survived by his siblings Carolyn Borchard of Scio, OR; Mary Arthur of Portola, CA, and Dennis Brown of Reno, NV; and his 14 grandchildren ages 7 to 30, 2 great-grandchildren, and 2 more great-grandchildren on the way.

Services will be held at the Blair Mortuary in Quincy, CA on June 5, 2021 at 11:00 am, with a potluck celebration of life at Gansner Park shortly after.  Loved ones, friends, fans, and others that knew Cliff are welcome to attend both events.

In lieu of flowers or donations, the family has requested that anyone positively impacted by Cliff to simply make time for your family, be kind, and – as he would do, have some warm pie and ice cream.