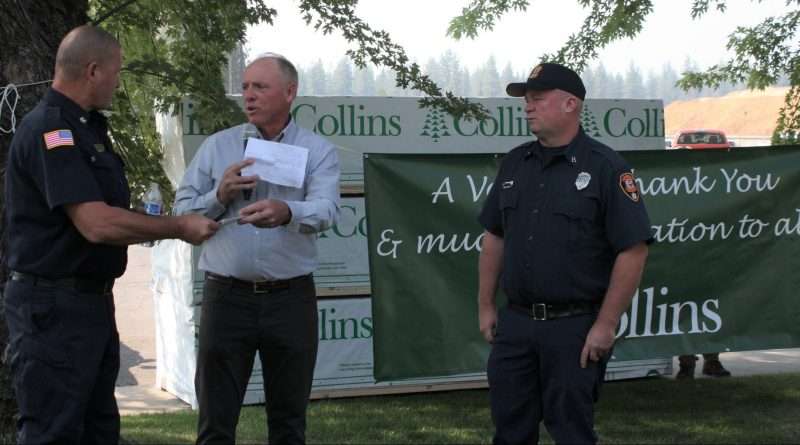 For anyone that has driven into Chester from the east they will surely have a vision in their minds of a stark white plume of steam soaring into the sky from the cogeneration plant at Collins Pine. It is truly a reminder of the presence of the Collins Company in our community. The other reminder is the simple fact the they are the largest private sector employer in the area. Between the physical mill, the cogeneration plant and the Collins Almanor Forest, they employ approximately 120 employees currently here in Chester and that doesn’t include the forest contractor they hire to build roads, harvest trees and haul them to the mill.

The history of the Collins Companies goes back into the nineteenth century and to date they still have thriving operations in Kane, Pennsylvania and Lake View, Oregon.   The beginnings of the Collins family commitment to Chester began in 1941 when they started stockpiling logs in the Chester ‘pond’ and log yard in anticipation of processing them in the Chester mill that was being built.

On Thursday, Sept. 2, several folks from the corporate office in Wilsonville, OR, flew down to the local office to confirm the family’s 80-year commitment to Chester. TJ Rosengarth, President and CEO; Jeff Stoddard, Chief Operations Officer; and Rebeka Cunningtom, VP of Human Resources; wanted to personally thank the employees and the community for the extraordinary efforts that they displayed in combating the effects of the Dixie Fire on the area. The venue for the event was a bountiful steak barbeque with all the trimmings on the front lawn of the Collins office in front of the mill.

Of the approximately 100,000 acres of Collins Almanor Forest there was roughly 55,000 acres that were impacted in varying degrees by the fire. Rosengarth specifically thanked the Collins Forestry Department along with local and state fire units, without whose efforts the damage could have been much worse. He along with Terry Collins, also thanked many local individuals and businesses for their support during those trying times.  The invitees included all the mill and forestry department employees, local fire and law enforcement agencies and several local businesses and organization. During the ceremony, Rosengarth presented a check for $50,000 dollars to the Chester Fire Department and $15,000 dollars to the Almanor Basin Food Bank.

One of the main points stressed by Rosengarth and Collins was the continued pledge of long-standing commitment and support to Chester and the surrounding community. Rosengarth stressed that the plan is to increase production capacity of the mill to deal with the fire aftermath. That means they will be hiring new employees in an effort to expand work shifts and mill capabilities. He also said, “We are looking for people.”  Folks that are looking for work should call the local Collins office at (530) 258-4417.