A collision between a Lexus and a Freightliner caused injured all three occupants of the Lexus on May 4.

According to a report by the California Highway Patrol, Jennifer Maynard, 38, of Greenville was driving northbound on Highway 89 on the Crescent Grade in the number 2 lane at 11:10 a.m. on May 4. She had two passengers Justin Timmins, 39, also of Greenville, and Todd Thornston, 55, of Chester.

Maynard and Timmins suffered minor injuries, but Thornton, who wasn’t wearing a seatbelt, was ejected and sustained major injuries. He was flown to Renown Medical Center in Reno for treatment.

The investigation into the collision is ongoing.

The Quincy California Highway Patrol responded to a traffic collision on Sunday, May 30 at approximately 2:26 p.m. off of… 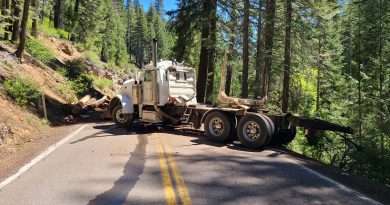 Information in the Sheriff’s Blotter is gathered from the dispatch logs provided by the Plumas County Sheriff’s Office. No individuals’…