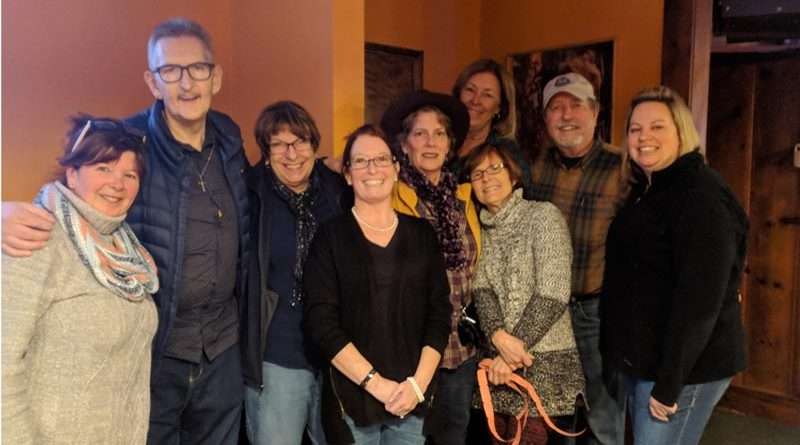 What started as a call to the community for financial aid in keeping the doors of the Lost Sierra Tourist Center open turned into a fundraiser held at Gumba’s Family Pizza in Blairsden the evening of Feb. 20, raising upwards of $1,500 in donations and prize drawing ticket sales.

LSTC Executive Director Audrey Ellis began efforts to fundraise via a GoFundMe account, with a goal to raise $20,000 in emergency funds to go toward keeping the tourist center open.

“The tourist center is in imminent danger of closing,” Ellis remarked, “But the fundraising efforts are coming along — slowly, but surely!”

Donna Mills, a board member with the Lost Sierra Chamber of Commerce, initially reached out to Matt and Elizabeth Cruse, proprietors of Gumba’s Family Pizza, with a slice of an idea — a pizza fundraiser.

“The plan was that Gumba’s would host a fundraiser on Feb. 20, from 5 to 9 p.m., and for each dollar spent at Gumba’s, they wanted to donate 20 percent to LSTC,” Ellis explained. “After Donna spoke with them, the Cruses really took it from there and made it a great evening.”

The plan changed a bit on the day of the event, however.

“Matt and Elizabeth decided to make a change, and it turns out that they extended the hours of the fundraiser to include the sales from the entire day of the fundraiser,” Ellis said, smiling, “It was so gracious of them!”

The atmosphere inside Gumba’s was warm, friendly and scented with hot pizza as the evening kicked off. LSTC’s Jan Tew manned the prize-drawing table, with offerings from a multitude of local businesses displayed and wrapped in tempting prize baskets by Joanne Williamson of Feathers.

“We give special thanks to all of our donors,” Ellis said. “Within 12 days of beginning to organize this event, the prizes started coming in to us for the drawing.”

Ellis explained that they were selling prize drawing tickets as long as your arm, or a “wingspan of tickets,” for $20, with attendees exclaiming over the potential prizes to be won as they stood to be measured by Tew and Ellis.

One gentleman had quite the “wingspan” and others gathered around laughing about the unfair advantage of the very tall.

Ryan Nielsen was also in attendance as the evening’s magic act, serving as the “Closeup Magician,” as he wove between tables entertaining attendees with his box of tricks, wearing a brightly colored vest that hid a variety of secret, magical props.

“It was really a tremendous night, with great support,” Ellis said happily. “The community spirit at Gumba’s is second to none and they are a great asset to the community. I am in awe of their support of the LSTC.”

Local Vicki Rowden was also in attendance at the event and noted that she felt that LSTC does a great job in promoting Plumas County. “They really work to promote all of Plumas County, and it was wonderful to see the community come together in support at Gumba’s. I can’t overstate how appreciated Gumba’s is in the support of our community. I would like to encourage the support of our county supervisors in keeping the center open as well.”

One thought on “Community gathers in Blairsden to support tourist center”