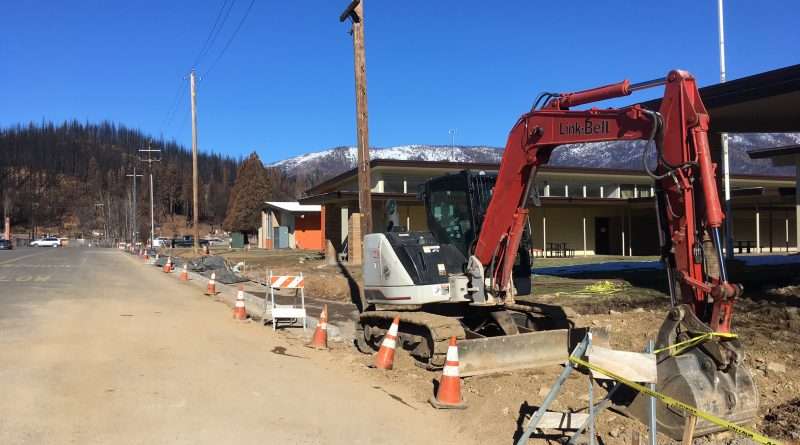 They came from wherever they are living now: Quincy, Susanville, Chico, Paradise—a circle of former residents along with the currently remaining residents of Indian Valley, Canyon Damn, and Indian Falls. Butterfly Valley too. Nearly 200 people came together on the sunny Saturday morning of Jan. 22 to both gather information and report out information.

Many community volunteers announced the progress of various projects.

“Happy New Year!” exclaimed supervisor Kevin Goss at the beginning of the meeting. He took a bit of a role as emcee along with Tyler Pew and also fielded Q & A questions at the end. He acknowledged as well that it has to be a happy new year as Indian Valley has nowhere to go but up.

“I want to acknowledge all the hard work people have been doing behind the scenes, the county, etc. and also acknowledge the trauma we’ve all been through,” said Goss before yielding the microphone over to pastor Terry Jones who reflected on a passage from Joshua about resilience and healing and then led a prayer to be “strong and courageous” and “have patience in dealing with one another.” Nothing could be more apt to the rebuilding process.

There was much to celebrate.

Sheriff Todd Johns got as much applause as any rock star for announcing that Pete of Nellz Towne Pump is officially opening next Wednesday, January 26 much to the relief of everyone who has had to drive to Quincy to get gas so they could drive—to Quincy these last five months.

The Dixie Fire Collaborative unveiled the new website: www.dixiefirecollaborative.org put together by Greenville native Brooke Rahn. The DFC also made up 150 binders titled “The Disaster Recovery Handbook” filled with sheets of resources and guides on dealing with both agencies as well as exercises to deal with stress and trauma.

“It’s taken a long time but we hope to be up and running by April. We wanted to find a way to cut some lumber here and have it stay here, keep our people working, not waste what is being cut down [after the fire]. Breaks my heart to see all this stuff go to waste,” said Pew. J&C Enterprises has finished its first boards, he said, but full boards won’t happen till April and grading and planing won’t be happening until at least June. The mill is facing the same issues as much of the country when it comes to supply chain issues and parts. Pew brought much joy to the room when he said, “if you have logs, we will bring you back firewood.” The applause were thunderous. Pew expressed dedication in trying to utilize as many logs as possible that have been downed.

Co-chairs of the DFC Sue Weber (by Zoom) and Clint Koble addressed the meeting. “We’ve come along way since we first formed in October.” They also let it be known that new committees are being formed: a fire mitigation and reforestation committee, a recreation committee, and a celebration committee. They also reminded that the DFC formed to “fulfill unmet needs.”

“We want to celebrate all of our advances,” said Weber.

One of the most intriguing reports came from Kest Porter from the Rotary survey. Rotarians volunteered to call a list of all the people in Indian Valley and beyond who lost their homes in the Dixie Fire. Sue Weber made the master list months ago when she discovered that there wasn’t any database of who was in the area before the fire. While the Rotarian survey isn’t quite complete yet (the phone calls can take 30 minutes or so a piece), Porter had much data to report.

“Rebuilding Greenville is going to be a team effort. One of the first things we need to do is to gather information,” said Porter. He was referring to the survey the Rotary has undertaken to ask residents what their situations are. Porter reported out the results.

“We wanted to know where people were; 61% are in Plumas County somewhere, 17% in Northern California, 13% somewhere else in the another state. We are scattered all over the country,” said Porter. He went on to say that when asked 46% said they wanted to return.

“It’s far more positive than what we’ve been hearing. Property owners do want to rebuild 46%,” said Porter. Despite earlier rumors, 57% of those who lost their houses were fully insured, 28% had partial insurance. Only 15% didn’t have insurance at all.

Other aspects of the rebuild that were addressed were the recent soil sampling coming back with lead, mercury, and arsenic. Property owners were visibly upset about the possibility of setbacks in rebuilding.

Both Sheriff Johns and Supervisor Goss addressed this issue and others including the new temporary substation along highway 89 (not yet staffed) coming in, conversations with both FEMA and the USPS and a push to get mail delivery to post office boxes in Greenville (and Crescent Mills), and ongoing telecommunications issues from both AT&T and Frontier. There still isn’t reliable electric in the downtown area (which along with the lack of Internet is hampering getting the ATM machines back up and running at Plumas Bank).

Much of the gathering was also spent with Sue Weber, Tyler Pew, and Trina Cunningham offering up ideas for what a future Greenville and Indian Valley might look like.

“There is not one model of disaster recovery that brings back everyone and we worry all the time about that. We also need a town that brings other people to the town for future generations,” Weber said.

Tyler Pew indicated he’d been putting together a team of design and architectural firms—his area of expertise to discuss what the future of Greenville might look like.

“[We are looking at] what works and doesn’t work in different communities after disaster. We want to be moving in the direction of what the community wants,” said Pew, “this is a long road,” he added. He indicated that rebuilding the town had to have several main tracks at the same time: housing, infrastructure, downtown businesses, and future economic development.

Scott MacCallum of PCIRC reported that $35,000 worth of gift cards had been distributed to fire survivors. He also reported that they’ve attempted to establish tiny house compounds by purchasing land in Indian Valley but so far that had not come to fruition.

Goss reminded attendees that Greenville is now on the agenda for the board of supervisors the first and third meetings of the month and let the audience know that the DFC is working with the county to press for economic development in the valley.

“We need houses, jobs, businesses, and infrastructure,” Goss said, “so that we are thriving community again.”

Trina Cunningham executive director of the Maidu Summit Consortium, acknowledged that the Maidu have been erased from their homeland many times over the course of history and that the fire brought with it the opportunity to build back with better acknowledgement of Indian Valley’s Maidu heritage. There could be a place in the new Greenville that better acknowledges culture and cultural practices. She also spoke to the excavation of lots in burnt out sections of Greenville.

“Some homes were built on burial sites and old village sites. It’s a big concern as the excavation is happening for our ancestors.”

She explained to how many often vacation and travel to see other cultures and gave the examples of France and Italy for cultural immersion. She posed the question of whether that was possible—to make Greenville a destination site for cultural experience.

“[We should have] revitalization of Maidu language and culture along every stage of rebuilding,” Cunningham said.

Many questions, some answers

When the gathering opened up for Q & A with the residents, they asked about the traffic waits. Sheriff Johns responded that the helicopter was gone to applause once more. Wait times for traffic are to be no longer than 15 minutes now (drivers have been waiting up to 45 minutes at traffic stops).

Others wanted to know if guardrails were going to go up on the grade. Historically, cars have gone off the grade, with the trees, now cut down, being the only thing stopping cars from rolling onto private property below. Sheriff Johns vowed to look into it.

Was the Forest Service planning on any reforestation along the roadways was another question of concern.

Still others were concerned that there are not enough contractors in Plumas County for the rebuild. Cunningham brought up getting existing not lived in dilapidated homes up to code to house people.

Many residents whose lots burned brought up the charge of $78 a month which many cannot afford—to keep the IVCSD solvent.

While problems were not solved, participants walked away feeling heard and that the meetings themselves offered hope and a step in the right direction.