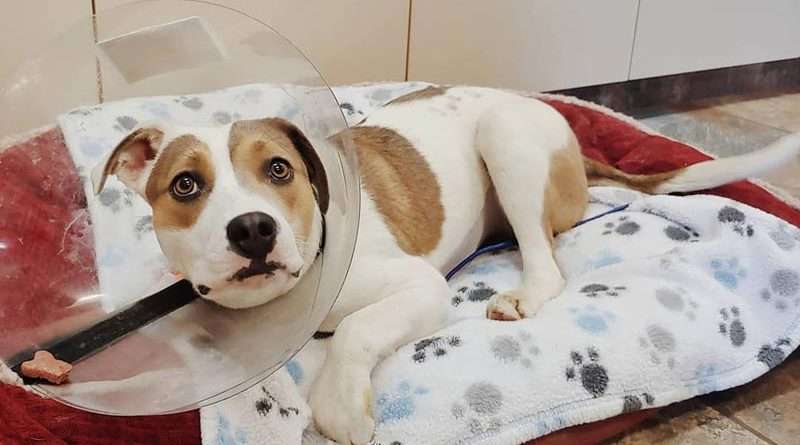 The community came together to raise funds to pay for Calypso’s surgery, removing a 2 1/2-foot long kidney worm from Calypso’s right kidney, as well as another smaller one, with the pup home to recover Feb. 25. Photo by Abigail Birnbryer
News
March 4, 2020March 6, 2020 Lauren Westmoreland, Staff Writer

Calypso walked into High Sierra Animal Rescue and into the hearts of all at the shelter just like thousands of rescue dogs before her, and just like the many before Calypso, she was immediately loved and valued.

After a week in the care of High Sierra, staff realized that something wasn’t quite right, there was blood in her urine and she needed medical attention immediately.

According to Abigail Birnbryer, director of Marketing and Fundraising at the shelter, staff brought Calypso to the American Valley Animal Hospital in Quincy where she was given antibiotics to cure a simple urinary tract infection.

The symptoms persisted and as she went in for her spay surgery it became apparent that something was very, very wrong.

All of the tissue in her abdominal cavity was made up of a different substance and color than it should be, and they promptly sent off samples to be tested.

As staff at HSAR listened to the report of her health, they were all in shock. “The veterinarian in Quincy had never seen this before and as our Kennels Manager did more research, he realized that not many vets in our region have,” said Birnbryer.

Calypso was diagnosed with a giant kidney worm, which was residing in her kidney, with the veterinarian explaining that the worm had laid thousands of eggs in her, causing the different colored substances that was surrounding her organs.

This is an extremely rare parasite and it takes specific steps and stages to get inside of a very unlucky dog. “We believe Calypso was exposed to this worm after eating an infected fish or amphibian,” Birnbryer explained.

“Unfortunately, we know nothing of her past because she was left in the outdoor kennel one night at Lassen Animal Control with her siblings (who thankfully have shown no signs of also having a Giant Kidney Worm).”

This horrible parasite has the ability to grow up to 3 feet in length within a kidney and will kill its host if left untreated.

“As with all of our major surgeries, we turned to Sierra Veterinary Specialists in Reno for help,” Birnbryer said. “After a consultation they agreed to perform an ultrasound and then operate on Calypso and remove the affected kidney if she was well enough.”

This surgery can cost up to $5,000. There are very few reported cases, but staff at the rescue remained hopeful, along with Calypso’s surgeon.

“We adore her in every way and know that she will brighten the lives of everyone that she meets,” Birnbryer added.

Time is of the essence in successful treatment of this rare parasite, and HSAR immediately put out a call for financial aid to the community to cover expenses for the life-saving surgery.

Within a week, the community had raised over $4,700, and Calypso was able to go in for her procedure.

A 2 1/2-foot long kidney worm was found in Calypso’s right kidney, as well as another smaller one. “Calypso will be on medication for some time, and have some follow up appointments, but the hard part is over,” Birnbryer smiled. “We are so grateful that she pulled through and for all of the donations that helped to pay for her surgery, thank you!”

Now that Calypso is recovering, her biggest wish is a quiet space to recover with a loving foster family and ultimately, a forever home. For more information on Calypso and how you can help, call 832-4727 or email [email protected]

Giant kidney worms and how they affect the host

Giant kidney worm —Dioctophyma Renale — is an extremely rare parasite that infects and lives in the kidney as it grows up to over 3 feet long.

The worm starts as a small egg and develops if it is in water for one to seven months. Once it develops, it can be eaten by an earthworm, or other initial host, which will cause the worm to develop into larvae.

The giant kidney worm will remain in larvae form, even after the earthworm is eaten by an intermediate host, like a frog or a fish.

Once that fish/frog has been consumed by a host, typically mammals like dogs, minks or humans, the larvae will move from the intestines, to the liver, and finally the kidney, where they will take approximately six months to become full adults.

Once there, they will produce eggs and deteriorate the function and tissue of the kidney until it fails.

They typically inhabit the right kidney, as that is closest to the intestinal tract, but in severe cases can infect both kidneys.

As rare as this parasite is, it is even rarer to find in a living dog since it typically infects one kidney, and just like humans, dogs can function with one working kidney.

The worm is typically found in necropsy and autopsy reports for unexplained or early death in dogs.

The worm is zoonotic, so it can infect any animal, including humans. It is not a contagious disease though; it is a parasite that lives in the body and will produce eggs that are eliminated in the urine.

The eggs can be eaten/drank by other animals, with no definitive answer on if that would cause the worm to develop in their own body.