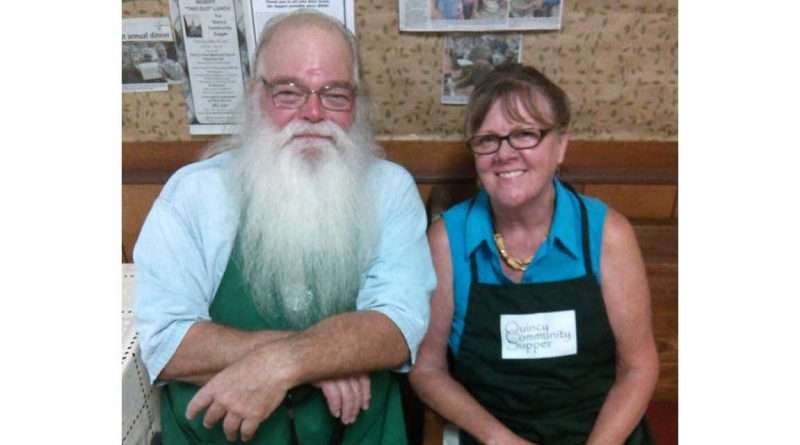 Larry Trotter, with his long white beard, smiling eyes and rosy cheeks, is one of the jolliest-looking people in Quincy. Linda Moore is quieter, but just as warm and giving. Trotter and Moore are longtime volunteers with the Community Supper in Quincy.

Trotter said the idea of feeding the hungry had been “kicking around” for some time before Pastor Cynthia Stateman arrived in Quincy in 2000. However, the idea hadn’t gained any traction. Trotter said, “It was Stateman who told everyone, ‘This is going to happen.’”

The first Community Supper in Quincy took place Sept. 11, 2002. Since that date, community suppers have been served in Quincy 51 Wednesdays a year for 15 years.

The Community Supper will celebrate its 15th anniversary Wednesday, Sept. 13, at the Community United Methodist Church, 282 Jackson St., in Quincy.

It’s not a soup kitchen!

“Anybody’s welcome to come to dinner,” said Trotter. “We started off with a grant to feed seniors, children and the homeless, but we didn’t want the supper to be a soup kitchen. We wanted everyone in the community to come and to serve everyone a good, healthy, meal in a clean and safe place.”

“We have all kinds of people come in to eat here,” said Trotter. “Judges, doctors and some people who we know may only get one hot meal a week.”

Moore observed, “Mormons serve alongside Baptists, with all denominations interacting.” She added, “All the groups work with a cheerful heart.”

Who pays for the food?

All the money for the community suppers comes from local contributions. Diners put donations into a coffee can present during the suppers, church and civic groups contribute both food and labor when they host a supper, and a number of generous, but anonymous, local donors contribute money as well.

Trotter noted that 80-plus church and civic groups have taken turns hosting suppers over the years: designing the meals, buying the food, preparing the food, serving the food to the community and doing cleanup.

Moore said that most of the groups are signed up to serve a year ahead of time. Hosting a supper is a great way for groups to bond while doing something good for the community. Contributions and new groups to host dinners are always welcome, she added.

If a group doesn’t have the money to pay for all of the food they serve, Moore said that she and other volunteers would find the money to repay them from their receipts.

“At one time,” Trotter noted, “the Federal Emergency Management Agency used to help pay for suppers. However, he said, that funding hasn’t happened for several years.” Trotter wasn’t sure why.

Who coordinates the program?

In describing the evolution of the program, Trotter said, “Things change, but things have remained the same.” For instance, he said, “Some people have moved or passed away, but others have stepped up and taken their place.”

Moore, for her part, has been present for the vast majority of community suppers served over the last 15 years. She helps to keep things running smoothly, along with a number of volunteers who help on Wednesday evenings.

Trotter ‘s job is to serve as the master of ceremonies; getting everyone hungry by announcing what is going to be served that evening, and coordinating the announcements of upcoming events.

Trotter noted that Elliott, secretary for the Core Group, does a great job of encouraging church and civic groups hosting suppers to make sure they have everything they need to be successful with their meal.

Trotter noted that the Core Group has also paid for the tables and chairs used for the suppers and for upgrades to the kitchen, including purchasing a new freezer, refrigerator, stoves, utensils and flooring, as well as painting, over the years.

The Plumas Crisis Intervention & Resource Center, a local nonprofit, keeps track of the money for the Core Group, said Moore.

Trotter noted that any individual community supper will feed from 100 to 250 people.

The Core Group estimates that it has served at least 100,000 community meals since 2002. However, Trotter said the number of meals served was probably closer to 250,000 meals when you consider the number of people getting seconds or thirds, and the number of takeout dinners and meals delivered to homebound people.

Trotter emphasized that the Core Group hardly ever knows what the menu is going to be before the host group for that night begins preparing it.

“People ask us all the time, but we just don’t know,” said Trotter.

Moore moved to Quincy in 1970 to go to Feather River College. She later worked for county schools and FRC. She said she serves people to help “make the world a better place.”

Trotter says he serves others as part of his ministry, “I believe it is part of a commission that Christ gave us Himself, to take care of others.”

That day he picked up a large cardboard box. “Underneath were six rattlesnakes. I decided right there and then that I was going to move to the mountains,” declared Trotter.

Later, as Trotter was selling his belongings at a garage sale to prepare for his move, he said a guy walked up and asked him, where he was moving to?

“I don’t know,” Trotter answered. “Somewhere in the mountains between Death Valley and Lake Tahoe.”

“Have you ever heard of Quincy?” asked the guy.

“No,” answered Trotter. “Can you show me where it is located on a map?”

So, Trotter moved to Quincy. He said that within two hours of arriving in Quincy, he had two job offers and had found two places to stay.

Since then, Trotter said, he has worked at gold mining, running heavy equipment, working for the Plumas County Building Department, fixing cars and installing woodstoves.

When and where community suppers are offered in Plumas County

When: 6 p.m. every Wednesday of the year except for the third week in November, when a special fundraising dinner takes place.

When: 6 p.m. on the second and fourth Thursdays of the month, November – April.

When: 6 p.m. on the last Wednesday of the month from January – October. Holiday community suppers are usually served the Wednesday before Thanksgiving and Christmas.