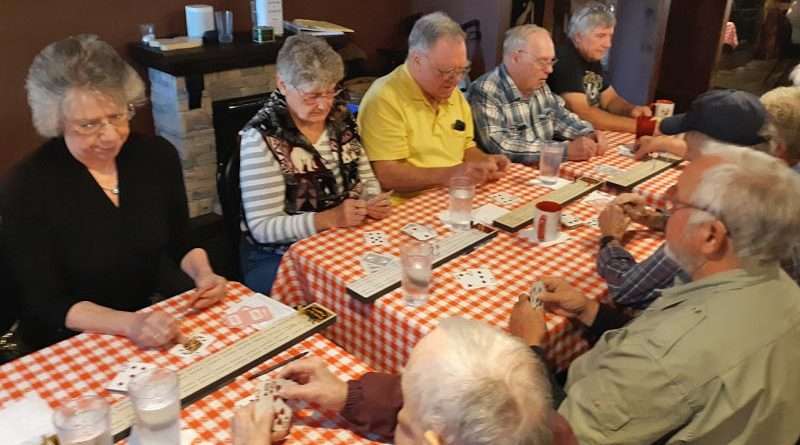 The Graeagle Peggers cribbage club plays a nine-game tournament every Saturday at Gumba’s Restaurant in Blairsden. It’s open to all cribbage players, regardless of skill level. The summer sessions are not ACC sanctioned so it’s a good time for players to hone their skills. Photo submitted
Graeagle Peggers Sports
June 19, 2019June 18, 2019 Doug Rodrigues

We had 13 players at our Saturday, June 8, crib tourney with three regular visitors from the Reno grassroots cribbage club: Beverly Castillo, Les Rasmussen and Reiner Talmet. The women swept the top two places with Lee Davis from Quincy taking first with a very solid day of play posting a score of 16 games points with eight wins out of the nine games played.

She was followed closely by Jan Cook from Graeagle with a 15/6 (the game points added up with her three skunks) for second place. It is interesting to note that Jan beat Lee in the second to the last game of the day to keep Lee from getting a Grand Slam (winning all nine games) and pocketing the ever-growing Grand Slam/29-Hand Pot.

I won third place with a respectable 13/6 score while Brad Archer from Reno took fourth with a 12/6 day. Speaking of Brad, he surprised everyone by presenting Gumba’s Family Restaurant gift certificates to the top three finishers in club play for the 2018-19 season: Doug Rodrigues, Dave Boynton and Darlene Pekovich. Thanks Brad!

Susan Terry from Graeagle and I had a great game five. Susan got a 24-hand (also think 24-Hand Pot) and momentarily pulled away from me but after counting my hand and crib I was slightly ahead. In the last hand of the game, Susan was about 20 holes out counting first and got a nice 12-hand. I was four holes out after counting my hand and when I checked my crib Susan had to put an 8-9 in the crib and I put a pair of 7’s in my crib and an 8 was cut for 24 points. I (momentarily) took the 24-Hand Pot away from Susan only to lose it to Reiner later in the day.

There was only one 4-of-a-kind posted for the day and that was held by Jan Cook to win the 4-of-a-Kind Pot. There were four 24-hands held by Brad, Susan Terry, myself and Reiner Talmet who got the last one to win the 24-Hand Pot.

Some players have asked about muggins and why they are not used any longer. A “muggin” is taken when a player misses points in his hand. For example, if a player had 12 points in his hand but only took 10, the opponent can call “muggings” and take the two points the player missed. Muggins was dropped from club and tournament play several years ago, but are still used in one tournament a year, the Tournament of Champions or TOC.

The TOC is an invitational tournament played once a year at the Grand National  and muggins are still played in that one tournament. Perhaps the muggins was dropped because it was like a double jeopardy. Having missed them already penalized the player in the example above, who missed the 2 points, and then the opponent took another 2 points resulting in a differential of 4 points, double jeopardy. I think it just provided a negative tone to the game, especially for the player missing the points and especially if that player was new to the game.

The Graeagle Peggers Grassroots Cribbage Club meets at Gumba’s Pizza in Blairsden every Saturday for a nine-game tournament. Check-in is at 10:45 a.m., and play begins at 11 a.m. They are in their summer session so these contests are not sanctioned by the American Cribbage Congress. But, it is a great time to join the group and learn more about the great game of cribbage.

For more information or questions, contact me, Doug Rodrigues, the club’s director at 836-4254. Players of all skill levels are welcome!