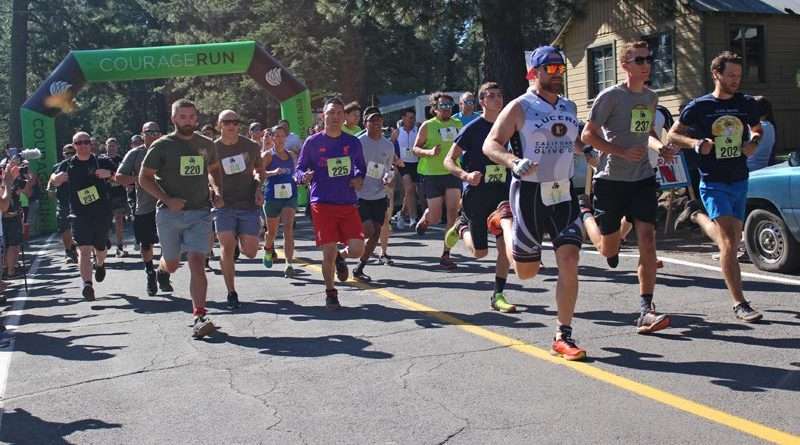 The annual 2019 Courage Triathlon starts with competitors running 2.8-miles to their road bikes, then ride another 7.1-miles with a final leg consisting of a 4.1-mile kayak paddle along the west shore of Lake Almanor on Aug. 24 at Plumas Pines Resort. Photos by Stacy Fisher

Marathoners converged on Plumas Pines Resort in Canyon Dam on Aug. 24 to compete in the fifth annual 2019 Courage Triathlon fundraising event hosted by Courage Worldwide, a nonprofit founded by CEO Jenny Williamson to help house teen girls 18 years of age and young female adults who have been sexually abused through the sex trafficking trade.

The triathlon featured a 14-mile loop encompassing a 2.8-mile run, followed by a 7.1-mile bike ride, and ending with a final leg that consisted of a 4.1-mile kayak paddle along the west shore of Lake Almanor, and then a short sprint back to Plumas Pines where the crowd of spectators cheered the athletes as they crossed the finish line.

Both individuals and three-person teams competed in the charity event — from teenagers through seasoned citizens — with many familiar faces attending from prior years as well as those competing for the first time. Three-person teams divided each leg of the race between team members.

Vendors providing resources and information to those in attendance includedLassen Family Services, Applied Kinetic Concepts, Scentsy, Anchor of The Soul Art, Eagle Strategies and others.

Courage Triathlon coordinator Joanne Vice said the idea for a triathlon originally began with Courage Ambassador Dawn Hershberger, whose efforts to create a fundraiser to find ways to raise money for Courage Worldwide had led to the yearly event in Plumas County and in other regions of Northern California.

Headquartered in Sacramento, Courage Worldwide has a mission to protect as many victims of sex trafficking as possible in addition to increasing community awareness about the multi-billion dollar sex trafficking trade, while providing safe housing for those rescued from sexual exploitation.

This year saw a total of 303 athletes competing, according to figures provided by Courage Worldwide, and took in a total of $27,855.12. One hundred percent of the proceeds go directly to providing services, Williamson said.

Along with traffic assistance from the CHP, team members from regional fire and law enforcement agencies participate in the annual triathlon and provide other support. Courage Worldwide has also established a close partnership with the USFS-Almanor District and other groups.

Organizers of the Courage Triathlon wanted to thank Glen and Todd Geer of Plumas Pines Resort for providing the venue for the race.

As with the past four triathlons and again this year, the Bizz Running Company timed the racers. Doug Cain Sound Productions provided music during the event, which he has done each year at no cost.

This year’s overall winner of the triathlon, male division, was Pierre Redmond of Lake Almanor with a time of 01:37:01.09, who participated in all three legs of the event. Overall winner, female division, was Dianne Dennler of Susanville with a time of 01:51:14.39. The three-member team of the North Arm Regulars, consisting of Michael Leonard, John Shower and Dov Weinman had a winning time of 01:23:56.50. The winners of the Women’s Team Division were the “Mountain Girls,” comprising Lisa Balestrini, Charity Moore and Lisa Urquizu all from Susanville, crossing the finish line at 01:47:24.53.

For a complete listing of race times for all participants go to www.bizzrunningcompany.com.

Williamson said she was thrilled to attend the fundraiser, remarking that, “I was so impressed with the dedication of our 105 volunteers and the commitment by our sponsors who made the fundraiser so successful again this year.”

A big thanks was given to Dawn and John Hershberger and Joanne Vice as well for their contributions in organizing the event.

The affair is especially important Vice said because it helps the organization maintain services for young women living in a secure environment, adding that not only do many of the victims of human trafficking find a safe haven through Courage Worldwide, but are also provided resources for tuition and books, food, day care, automotive needs and other services, plus case management and trauma therapy and much more.

Check out the Courage Worldwide website at: courageworldwide.org to donate (under the drop menu labeled Take Action), and for information on the organization. For specific information email: events@couragewoldwide.org.