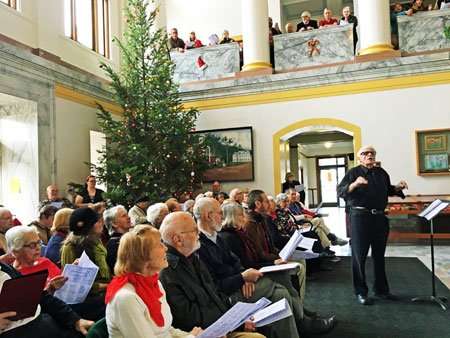 Wonderful music and a strong sense of community filled the Plumas County Courthouse on Dec. 11, at 2 p.m., for the 47th annual Courthouse Sing sponsored by the Soroptimists.

Musical director and local author John Probst did a skillful job conducting, in the round, the community choir of more than 100 persons surrounding him. Voices reverberated off the three floors of century-old marble that make up the courthouse interior.

With all levels facing each other, the resulting sound was somewhat ethereal and supernatural.

Pianist Alice King displayed her versatility in accompanying all selections except Debbie Freeze, who accompanied herself.

“I don’t know of any other place where something like this happens,” announced Probst to the crowd at the event’s conclusion. “That the county allows us to come in each year and have this kind of event is … well it’s just special,” said Probst.

Hollister seconded the proclamation that the Plumas County Courthouse Sing is one-of-a-kind.

As the throng of long-time community members filed out after the event, recycling programs for other sing-a-long events as requested, joy and sentiment seemed to abound.

“This year, as we have for the last five years, Rick Stock and I went to get the tree. And it’s one of our traditions. We have a very little truck that we use. There is only the two of us and we try and get the largest tree possible.

“This year I think we succeeded and we knew we had succeeded when we finally were able to hoist the tree onto the truck and it hit the ground both in the front and the back of the truck.

“We were thankful that CHP joined us in this mission suspending certain traffic laws to allow us to get the tree back to the courthouse. We are very thankful and very grateful for CHP’s efforts.

“The other funny part is, there is always a challenge with certain safety regulations. Our new safety officer is a wonderful guy, but he had some questions about exactly what was going on. I tried to reassure him by showing a picture from years past of me on the second level hanging over with one of the deputies holding me by the belt and me trying to put the star on the tree, because it really couldn’t get any more dangerous or worse than that.

“So, I let him know that this year really wasn’t that bad. I think now though there is a new tradition. After we get the tree into the courthouse, our new safety officer comes in and tells us all the rules we have just broken.”