Plumas County residents have watched the containment percentage for the Dixie Fire slowly creep up in the past couple weeks, but today they learned that the portion of the fire within the county is 91 percent contained.

That’s the information that Jerry McGowan, the incident commander for the east zone of the fire, shared with the Plumas County Board of Supervisors during the Sept. 14 meeting. The East Zone portion of the fire is at 88 percent containment.

McGowan said that the one-quarter to one-half inch of rain that fell across portions of the fire last Friday “definitely helped.”

The increase in containment is reflected in a decrease in personnel being assigned to the fire — from a high of nearly 6,500 to roughly 2,400 today. McGowan wants to ensure that any potential trouble spots (Devil’s Punch Bowl and Dixie Mountain) are addressed.

Plumas National Forest Supervisor Chris Carlton said firefighters “are trying to make as much progress as we can before other fires take resources.” This includes starting the vital reparation work.

Following the Dixie Fire presentation, fire personnel asked the supervisors if they had any questions. Board Chairman Jeff Engel said, “I think we are all burned out and all of this could have not happened if we had forest management for the last 50 years.” But he didn’t blame the Forest Service, saying that every time they try to do a timber sale, they get sued by environmentalists because of the frogs, spotted owls, etc. “Now where is their habitat?” he asked.

More on the East Zone

On many portions of the perimeter, firefighters have mopped up from 100 to 200 feet inside the fire line, and as reported during the board meeting, firefighters were very active in the Grizzly Peak/Devil’s Punchbowl area. Water sources were added in the Grizzly Peak/Devil’s Punchbowl area to provide a faster means of cooling the interior heat and deepen the hand line created by hotshot crews.

Today, fire suppression again focuses primarily in the Grizzly Peak/Devil’s Punchbowl area, and in the southeast corner of the fire near Dixie Mountain. There remains some hot spots in the form of large fuels – stumps, logs, standing snags – burning inside the control lines, where firefighters remain committed to reducing interior heat. Also, there are many hazard trees still standing in these areas that pose risk to firefighters and will be mitigated.

Meanwhile, there are an estimated 1,559 miles of dozer line and 90 miles of handline that will require inspection and in some cases repair work.

And over on the West Zone

Progress is also being made on the West Zone were evacuation orders for the Old Station and Hat Creek areas were downgraded from an order to a warning. Firefighters will continue to establish containment lines to the south of Old Station and north of Highway 44.

Firefighters continue with patrol and mop up on other areas of the fire. 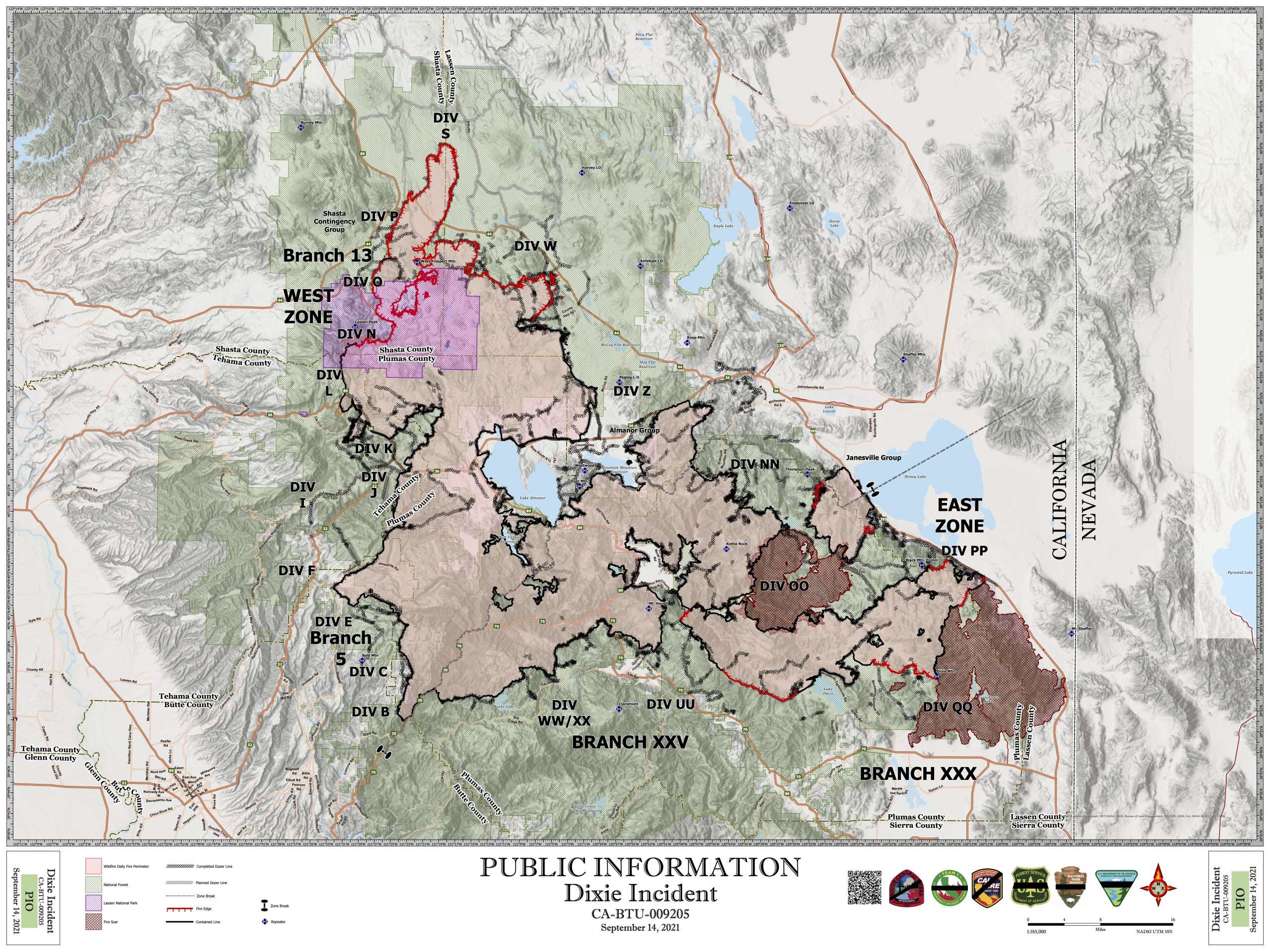