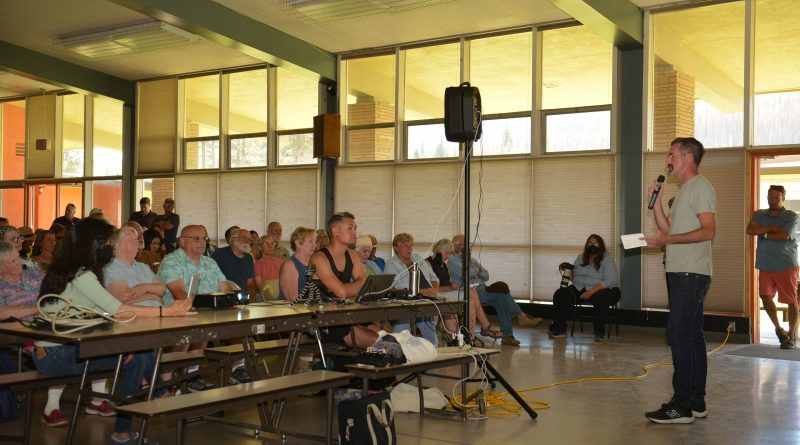 One could reasonably say there were far more questions asked at the monthly Dixie Fire Collaborative meeting than were answered by those presented with said questions—and many of those questions had to do with the Indian Valley Community Services District and insurance. As Indian Valley moves toward the anniversary of the fire, there’s much information coming out but no definitive answer to some issues.

Without fiber optic cable (which will come in but there is no exact date for it) internet connections downtown are still a bit unstable. This is what is hampering Plumas Bank’s efforts to put in a new ATM machine and what will affect the beginning of the new school year as Greenville Elementary School and Greenville High School reopen downtown.

Sue Weber reported that she will be working on a planning grant which is due mid-August. If received it is worth $750,000. Grant awards will be announced in November.

Kristi Gorbet, the new board chair of the Indian Valley Community Services District, provided some responses from the IVCSD board perspective. There were many questions after the board’s recent “Where I Stand” article on Plumas News.

“We’re in real trouble,” said Gorbet. With little to no revenue coming in, the IVCSD is operating on the small insurance payout it received after the fire. The water tank and pumps survived the Dixie Fire, however, all of the automatic operational equipment burned in the fire, so any water flowing is produced through manual controls. Repairs are estimated at $5 million. In addition, rebuilding the patchworked system from scratch rather than building on top of an already questionable system would be the wiser—but costlier—decision.

Gorbet reported what many have seen downtown: leaks everywhere as a result of the fire. Fixing the leaks appears to be a game of whack-a-mole. There are also sewer leaks everywhere. The IVCSD prior to the fire had a plan in place to make repairs and had set aside $1 million to do the work. Now with the damage, they need an additional $2.3 million and have been granted $300,000 for the effort.

“We’re going to operate as long as we can,” said Gorbet.

Additionally, the Indian Valley Volunteer Fire Department has a huge insurmountable insurance issue. The IVFD paid $5,800 a year for insurance coverage and had that policy canceled this summer as the anniversary of the fire approaches. The new insurance policy rate is $70,000 per year. If there’s no local fire department because of the inability to pay insurance, there becomes a threat of businesses and homeowners not being able to renew because there’s not a working fire department.

The temporary buildings for fire and sheriff were scheduled to be removed soon, but Sheriff Todd Johns is in communication with the deputy director of CalOES and has received an extension of use of those temporary trailer buildings into 2023.

“They are not going away,” Johns said.

Brett Cook and Eric Benson—two of the attorneys involved in PG&E lawsuits — reported to the community that mitigation efforts have failed with the energy company and that they now have a court hearing on July 27. They are hoping on a trial date at that time with the hopes that PG&E will begin settling residents’ claims.

Kest Porter reported out about the pop-up business corridor along Pine Street.  Indian Valley Thrift Store, along with a fitness center, are the next businesses that will occupy a space along Pine Street. Porter also reported on the “Innovation Hub” idea sported by John Steffanic of the Plumas County fair.

“If you have an idea to make something and sell it outside the country, bring your plan. We’re ready to go now,” said Porter.

Ken Donnell announced that there are Dixie Fire anniversary events planned from August 4 through 6. More on this in this week’s Greenville Rising column.

Perhaps one of the most innovative and interesting subjects brought up at the meeting came from Leila Levi regarding the formation of some sort of local co-op for Indian Valley based meats, dairy, and produce. Levi created a map with gardens and other food-related sites in the area and produced a sign-up sheet for people interested. She can be reached locally at (530) 284-7409.

Congressman Doug LaMalfa was also on hand, though he will no longer be representing Indian Valley as district lines have been redrawn. He was asked in various ways about how he could help the situation with the IVCSD and Indian Valley in general, and though he talked at length, he did not offer any ideas about helping the situation or introducing legislation to help rural communities facing insurance cancellation, higher rates, or climate change.

The DFC, which normally provides lunch at meetings, gave out food vouchers for attendees to purchase food from the food trucks on Pine Street which were all open for the Gold Diggers Day festivities.