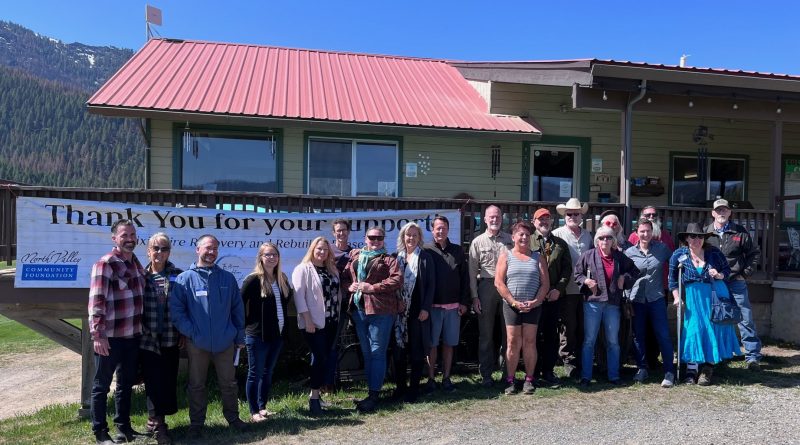 Last weekend, Thursday through Saturday, saw a consulting team brought in by Dixie Fire Collaborative meeting with residents, former residents, and hopeful future residents of Dixie Fire-decimated Greenville, Canyon Dam, and Indian Falls to listen to concerns and needs in the rebuilding of the communities.

The Friday night meeting at the Greenville Elementary School cafeteria saw 30 people coming out to listen to a presentation made by SERA Design, Open Scope Studio, and Tacktile Worx (SEROPTA) for what is being touted as Phase 0 of the rebuild. The big question, as explained by Tyler Pew was this: “What do you think the future should look like in Indian Valley?”

The DFC representatives also identified “short term wins” such as the pop-up business district coming to downtown Greenville, getting the schools up and running, etc.

It was also a good opportunity for residents to have questions answered. For example, many did not know that the Funders Roundtable, is made up of 14 different institutions who are raising funds for Greenville and other areas hit by the fire, pulling their resources together instead of being 14 separate relief efforts.

“I want us to decide,” said Moorea Stout of the director of the Lake Almanor Foundation and Crescent Mills resident, “how we rebuild and how we use funds to rebuild. She explained that the Funders Roundtable are attempting to fund unmet needs. “We fund, because things need to happen right now,” she continued.

Often with non-profit and governmental grants, it could be months and sometimes a year before people and organizations receive funding they seek.

“I know there is a desire to move forward but it takes time to bring people to the table,” said Tyler Pew, “we need to balance a sense of urgency with long term vision.”

Some of the issues brought up by Pew and others were zoning issues, keeping predatory businesses out of the area while welcoming and supporting small business of local residents.

Kest Porter of Rotary made a report regarding the pop-up business community, and those possibilities which look to be ready to go in May and the beginning of summer. Pop-up trailer based businesses attempting to get the pop-up downtown business district started include, a coffeeshop, Region Burger, Mary Shero’s German Grill, Way Station saloon trailer, the Indian Valley Thrift Shop, and Indian Head Properties so far.

There was talk of a Hunter’s Hardware trailer for much needed hardware in the rebuild.

The next morning at the Mt. Huff Golf Course café, business leaders and other influential residents in the community met to ‘break bread’ and talk with consultants about their visions for what is needed for Indian Valley to thrive in the future. Each person in a go-around explained why they were there, what their business was, and what their concerns were. Consultants asked questions and took notes on the stories of residents of Indian Valley.

When Greenville High School reopens next fall, for example, its facing a diminutive enrollment (at the moment it could be as low as 40 students 7th through 12th grades). What would it take to attract younger families to the post reconstruction community?

“The afternoon sessions where great. We have good turnout with about 80 community members and lots of little ones. It was a good mix of discussing the urgent challenges we face as well as the optimism and desire to build back for more. More families, more spaces for recreation/kids, and more intentions toward economic independence, energy and food, ” said Pew.

For the “Next Gen” group as Pew referred to it—those in 21 to 45 age range, there was about 22 people who showed up to voice their concerns.      “They voiced a lot of optimism as well as how we can better serve them and their peers.

One thing that stood out? When asked what thriving looks like, many voiced that they were already thriving by choosing to remain in Indian Valley. One family voiced it best—that we already have what many other seek a lifetime for: a beautiful place and a strong community.

“This was a good reminder that our strength is not our buildings. It is our collective optimism, care for the each other and get-it-done mentality,” said Pew.

SEROPTA were beyond impressed and inspired to work with the community members, according to Pew. They were tired after two 12-hour days, but and still felt “confident” and “excited” about the future of our community.

“Great things are ahead,” said Pew.

The next Dixie Fire Collaborative monthly meeting is tomorrow, April 1,6 from 11 a.m. to 1 p.m. at the Greenville Elementary School cafeteria. DA Dave Hollister will be speaking to residents about this week’s PG&E settlement news and how it will affect Indian Valley residents.