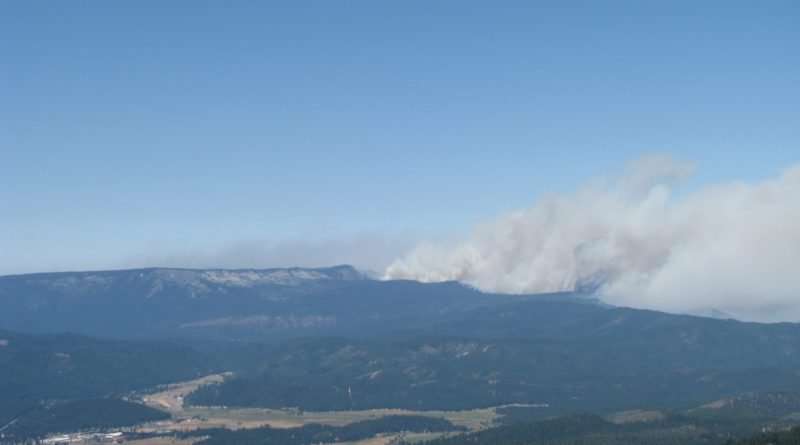 A view from the Argentine Lookout at the smoke above American Valley and Quincy. Photo by Scott Corey
News
July 21, 2021July 22, 2021 Editor

The Dixie Fire is threatening so many portions of Plumas County, that it would be almost easier to list the areas that aren’t threatened at this time.

According to tonight’s briefing, held at the Incident Command Center in Butte County, officials reported that the Dixie Fire is now 91,268 acres and remains 15 percent contained. As promised, more personnel have arrived on the scene and there are now 3,919 assigned to the fire.

The newest evacuation warning came just as tonight’s meeting got underway — Butterfly Valley, Round Valley Reservoir and Long Valley — were added due to a 100-acre spot fire near Eagle Rock. The full list of warnings and mandatory evacuation orders can be found below.

Cal Fire Chief Tony Brownell said that the main activity today was in the Bucks Lake area. Heavy smoke was evident from vantage points throughout the county as it was making a slope run. Brownell said it gained ground but was still within containment lines.

There are structure protection resources in Bucks Lake and Meadow Valley, as there are throughout all of the areas under evacuation. Sheriff’s personnel were conducting escorts into the Meadow Valley area for residents to retrieve items, but Plumas County Sheriff Todd Johns said those escorts are now suspended due to fire behavior.

As for the canyon, tonight’s presentation jumped around quite a bit, but it was reported that the fire is on the hill above Twain and crews are working to protect the community. There have been at least eight structures destroyed in the Belden/Tobin/Caribou area. It appears that Rush Creek has been spared.

“We do have resources up and down the Feather River Canyon to protect all of the communities,” Brownell said.

When asked how far the fire was away from communities, Brownell said several miles. He pointed out that one inch on the map represents one square mile, but those are aerial miles, so it is different when the fire is actually moving through the terrain.

He said that good progress had been made in the Butt Lake area, an opinion that Incident Commander Chief Nick Truax echoed later in the meeting. “We are making good progress in the Butt Lake area,” he said and attributed that to a “ton of help over there from the local timber companies, local fire agencies.” He said their assistance and knowledge of the area is invaluable.

Sheriff Todd Johns reminded residents that his dispatch center is small and being inundated with questions. To obtain the latest evacuation or road closure information, residents are encouraged to check the Sheriff’s Facebook page or call 283-3242.

Johns thanked a host of surrounding law enforcement agencies for sending staff to support road blocks and roaming patrols 24 hours per day. He asked residents to slow down and be careful when driving because of the tremendous amount of firefighters and other emergency personnel that will be present. “Please be vigilant and avoid all unnecessary travel” he said. He also encouraged residents to be aware of falling embers and to watch for spot fires.

On Friday the current Incident Command Team will get some help. It will continue to handle what will be described as the west side of the fire, while another Type 1 interagency team will take the east side. A camp is being set up in Quincy at the fairgrounds, with a second team going into Chester. The teams will work together closely and move resources between zones as needed.

Here are some answers to other questions:

Quincy is not threatened at this time.

Westwood is not threatened at this time.

Greenville is not threatened at this time. It is not under any kind of warning at this time, but residents should be vigilant.

Even though Chester, Hamilton Branch, the Lake Almanor Peninsula and the East Shore are all under an evacuation warning, just one of the group could be put under a mandatory order. They are considered individually.

The latest evacuation warnings can be seen by clicking here. 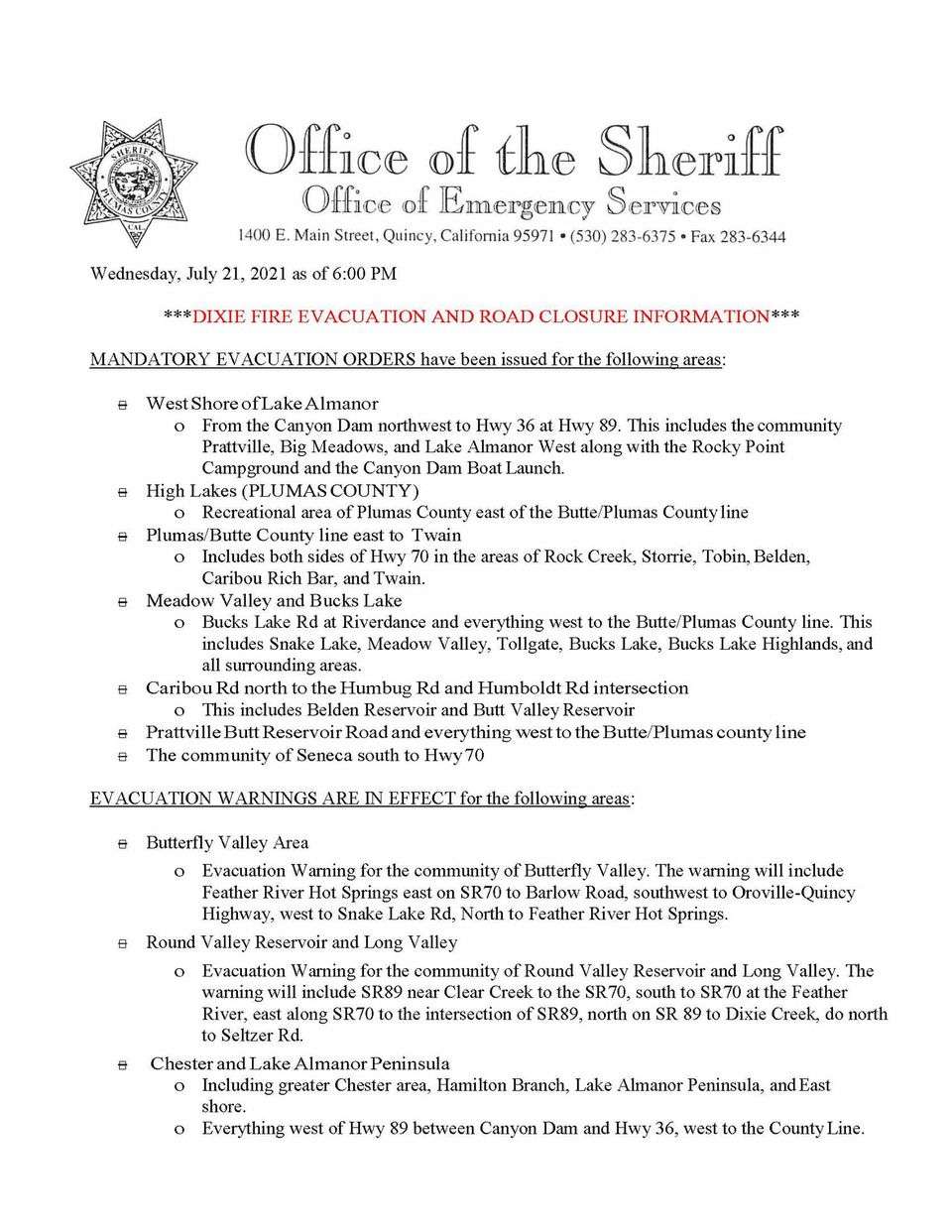 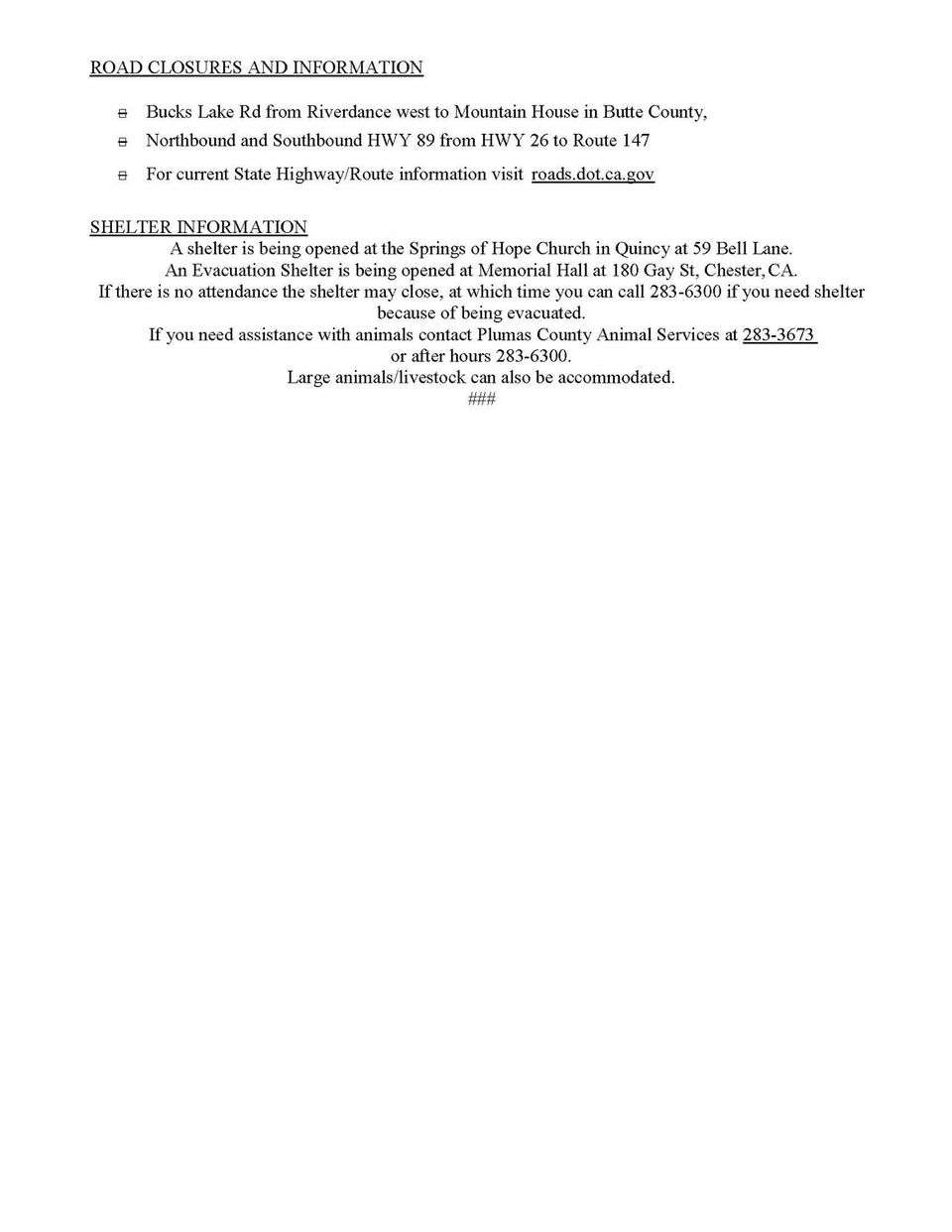