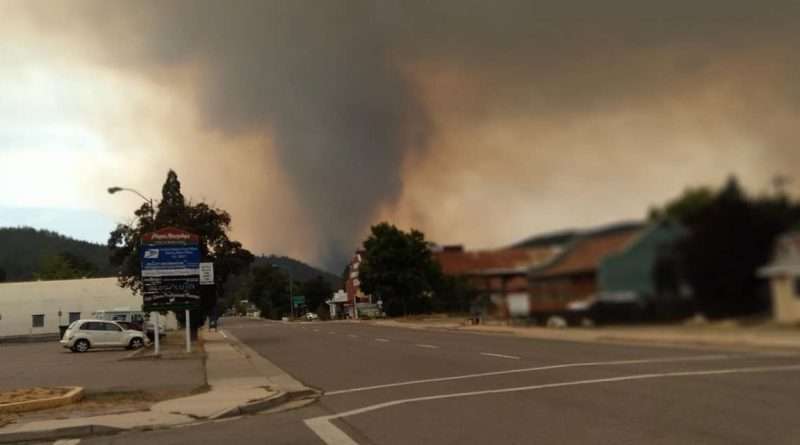 The late afternoon view from Quincy looking toward Meadow Valley caused quite a bit of concern. Backfires in the area got a little push from Mother Nature and drew the attention of a couple hotshot crews and other resources. Photo submitted
News
July 31, 2021August 2, 2021 Editor

Just because the Incident Command Management Team has reverted to every-other-night live briefings, doesn’t mean there isn’t news to report. Today was filled with the good, the bad and the smoke.

First the good news — evacuation warnings were lifted for the Almanor Basin and for Spring Garden and Greenhorn. And containment is up to 30 percent.

Now the bad news — the fire took off in the Rush Creek Road area of the Feather River Canyon threatening structures and flared up in Meadow Valley causing a couple spots. The plumes of smoke that rose into the sky harkened back to last weekend, which was filled with evacuation warnings and orders.

Then there was the smoke — heavier at times than others — and it was during the other times that the wind cleared out the smoke and fanned the flames.

The main fire activity will continue in the unburned interior islands along the north flank of the fire. Extreme fire behavior has been mostly influenced by heavy fuel loadings, stand density, and steep slopes. There are a variety of fuels throughout the area including mixed pine forest with grass understory, open grass, and isolated shrub areas. Live fuel moistures are very low, drought conditions are extreme in the region, and large dead fuels are very dry. There will be northeast wind gusts at 15-25 miles per hour this evening. Crews will continue to mop up and conduct fuel reduction operations, tactical patrol, and conduct damage assessments.

On the East Zone, clear skies allowed helicopters to assist ground crews and heavy equipment creating direct line in the Red Hill area. Firefighters are working to protect several cabins in the area.

In Long Valley, engine crews are mopping up containment line and putting out hotspots. Secure fireline is holding from Emigrant Road near Taylorsville, south to Mount Hough Road, west to Keddie, Butterfly Valley and Hambly Ravine to Bean Hill.

Smoke was visible today from Quincy, as crews burned a pocket of fuel inside the fire perimeter along Spanish Creek to increase the containment buffer zone and reduce future wildland fire risk. In Meadow Valley, helicopters are conducting tactical aerial ignition on the ridgeline to start a slow, low intensity firing operation that will back down both sides of the slopes to the valleys below in a multi-day, operation. Wildland firefighters are preparing for firing operations in the Bucks Lake Wilderness, if necessary.

Unmanned Aircraft Systems (UAS) are being used on the Evans Fire in Indian Valley, which is burning in the 2007 Moonlight Fire scar. Tall brush, heavy logs, dead trees and rugged terrain are challenging wildland firefighting efforts.