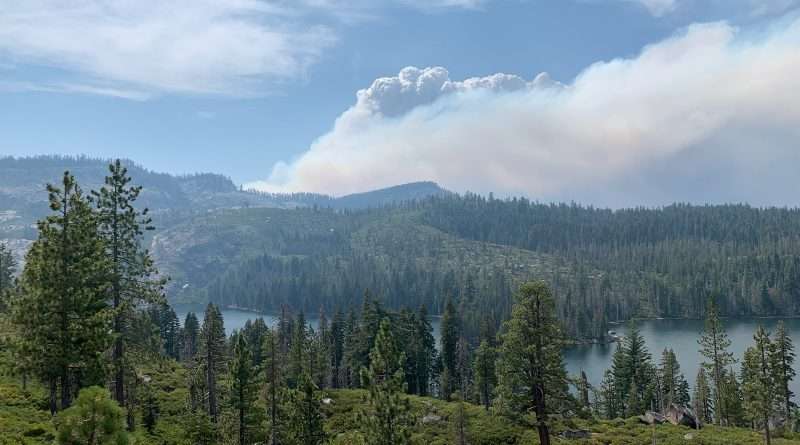 The view of the Dixie Fire from Silver Lake this afternoon, July 18. The fire advanced quickly today forcing the evacuation of Meadow Valley and Bucks Lake and the Highway 70 corridor to Twain. Photo by Suzanne Stirling
News
July 18, 2021July 19, 2021 Editor

What a difference a few hours can make. This morning the Dixie Fire briefing was upbeat as progress was reported on several flanks of the fire, though there was some concern about the fire moving to the northwest, and a larger containment zone was planned.

But just five hours later, the evacuation corridor in the Feather River Canyon expanded and residents and visitors at Bucks Lake and in Meadow Valley were told to evacuate immediately. And Highway 70 closed from Scooters at the west end of the Canyon to the Greenville Wye.

As of now a Mandatory Evacuation Order has been issued for Bucks Lake and Meadow Valley and for the Highway 70 corridor from the Plumas/Butte County line east to Twain.

An evacuation center has been established at Quincy High School (across from Safeway) for those under mandatory evacuation due to the Dixie Fire.

During tonight’s briefing, Operations Section Chief Tony Brownell, said that the fire got very active on two sides today, including the east side that caused the Plumas County evacuations. “This is where it got really active,” he said pointing to the east side of the fire. The fire jumped the Feather River and backed all the way down to Tobin. Then the fire spotted above Tobin, became established, and climbed up a steep hill. It is now burning west and north of Bucks Lake. “We want to keep it out of Bucks Lake and the Meadow Valley area,” Brownell said, but noted that it is very challenging country and difficult to get dozers in. So firefighters will be relying more on hand crews and engines.

He said the evacuations were ordered out of an abundance of caution because the fire was very active and it was anticipated that it could happen again on Monday. “We fight fire aggressively but we don’t want anybody to get hurt,” he said — not the public nor the firefighters.

Plumas County Sheriff Todd Johns also addressed the evacuations. “Today at roughly noon I received news that the fire jumped the Highway 70 corridor above Tobin. It covered 2 miles in less than an hour,” he said. “Based on their recommendations and what I was seeing, I chose to do a mandatory evacuation of the area.” He named all of the Plumas evacuation areas and said that security patrols would be checking properties.

When asked if Quincy residents should be worried, he said, “At this time I don’t see a threat to Quincy,”  but he asked residents to be aware that there could be a threat.

A specific question was asked about Tobin, and Chief Brownell said that he wasn’t aware of any loss in Tobin.

He was also asked about the status of two trains that were in the Canyon at the time the fire jumped and he said to his knowledge they were fine. He said the trains have been integral in moving fire personnel through the fire area.

As for Bucks Lake, Brownell said that resources have been moved there and that “by tomorrow morning (Monday) we will have a good plan.”  That area was prepped during the North Complex Fire last year. Currently the fire is 5 miles from Bucks Lake and 20 miles from Meadow Valley.

Other areas of the fire are holding well and protecting the Butte County communities of Magalia, Concow and Paradise. There is no threat to Sterling City at this time, though Butte Meadow and Jonesville are under evacuation advisories.

The fire is also active on the north end, and Brownell said crews are building a catcher’s mitt to keep it in check.