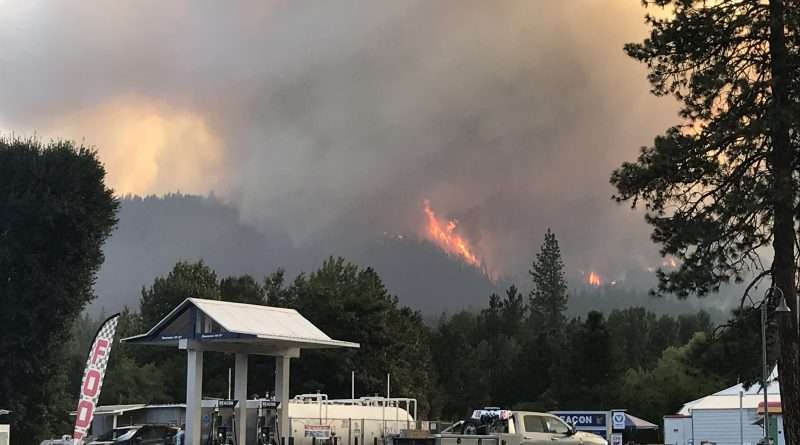 Today’s dire fire weather predictions came true as winds fanned the Dixie Fire throwing spot fires that threaten Greenville. Tonight mandatory evacuation orders extend from Greenville to Canyon Dam along the Highway 89 corridor and then west of Highway 89 to the junction with Highway 36. (Video is courtesy of Graham Shea)

The calls for evacuation came a little more than 24 hours after residents were allowed to return to their homes.

According to the data that was available at 7 p.m. tonight, the fire is 249,635 acres and 35 percent contained, although that number will jump significantly given what is happening near Greenville.

On the East Zone fire activity increased as higher temperatures, drier conditions and gusty west winds developed. Helicopters and air tankers were used extensively to drop retardant on hot spots along firelines and spot fires outside containment lines near Long Valley. Despite these efforts spot fires grew quickly and became established. The fire is moving to the northeast toward Greenville. An evacuation order has been reinstated for Greenville.

Near Rush Creek crews focused on holding the north fire perimeter while dozers and crews from the West and East Zones work to connect the fire lines. Tonight’s weather predicts poor relative humidity recovery making for a longer and active burn period. The hot, dry and gusty conditions are predicted through Wednesday evening, bringing potential for more erratic fire behavior.

Residents in areas along the north perimeter of the fire are advised to monitor Plumas County Sheriff’s website for evacuation information. If further evacuations are declared follow the route instructions given.

On the West Zone, fire behavior is expected to increase due to drying conditions as planned  fire continues to move toward control lines burning unburned interior islands and ridges. Crews will continue to mop up, conduct fuel reduction operations, and tactical patrol. All damage inspections are 100 percent complete for this incident.