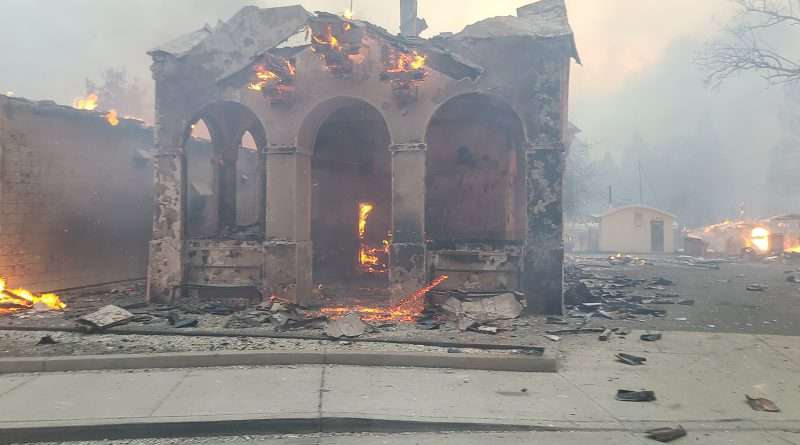 The Dixie Fire recovery efforts are a topic at every Plumas County Board of Supervisors meeting and Nov. 9 was no exception. While the board has been kept informed of the efforts to aid residents and local businesses, the county also has a stake in the effort — it lost several of its own buildings:

“Do we want to hold onto the parcels and rebuild. Or declare them surplus?” asked County Administrator Gabriel Hydrick.

The board’s discussion about its county buildings turned into the greater question of rebuilding in general.

Supervisor Greg Hagwood said he talked with representatives of a church that burned in Greenville and they’re questioning whether they are going to rebuild. “Will there be a congregation to attend?” they wanted to know. Hagwood said that if the cornerstones start dropping off, it will adversely impact the community’s ability to re-establish itself.

Even Supervisor Kevin Goss has questions. “Should I build back my building in downtown Greenville? Will there be enough folks to support it?”  He lost his family pharmacy and more in the fire. “Kind of a chicken and the egg thing,” he added.

Goss said there will be a meeting Nov. 20 to begin having those discussions. “It will kick off a series of meetings,” he said. “We want to try and get a sense of our organizations and who is going to come back.”

Some businesses, such as Riley’s Jerky, are putting in a new facility, and a gas station is preparing to reopen, but for others it’s still to be determined, he said.

As for the county properties, the board agreed that rebuilding the library would be important, but weren’t sure which direction the other buildings would take.

For example, should the town hall be rebuilt or could it be combined somehow with the recreation district’s community center?

Could the substation be housed with the new fire station when it is built? But what about the back portion of the substation, which belongs to the state. Would the state sign that portion over to the county so it could be declared surplus and sold?

Goss said that the community is interested in preserving the historic structure of the substation and repurposing it.

Board Chairman Jeff Engel said he thought it had been the consensus of the board to declare the town hall and the substation surplus property, but he would want to rebuild the library.

Goss said that maybe it would be possible to combine the library and town hall, making it easier on the facilities department to maintain and heat the structure. “Yes, definitely a library needs to be part of the equation in Greenville,” Goss said.

No final decisions were made and the board will continue to discuss its options.

Dennis Schmidt, manager of the Disaster Recovery Operations Center, said that 807 individuals had registered for FEMA by the Nov. 8 deadline. Nov. 15 is the deadline to register for an ROE (a right of entry for the state to clear a property) and thus far 654 have been received, with 481 accepted by the state. Debris removal is in progress, with 51 lots completed.

As for FEMA housing, there are three pads at Evergreen near Quincy and five in Westwood. This would accommodate 10 travel trailers and five mobile home units.

It was hoped that by the end of this week, 14 furnished trailers would be available at 240 Greenville Wolf Road, with six households prepared to move in at this time. Some individuals turned the offer down, due to their animals.

County Administrator Gabriel Hydrick said he is receiving reports from county employess that they are being sworn at as they try to assist those seeking housing.  “They become very agitated and very derogatory to county staff,” Hydrick said of some individuals. “A lot of county staff has been putting in long hours. We’re doing as much as we can, as quickly as we can.”

Sheriff Todd Johns told the board that he has been working to improve the traffic delays and had seen an improvement in recent days. “They are trying to coordinate,” he said of the various stops. “They are working on it; they are aware of it.”