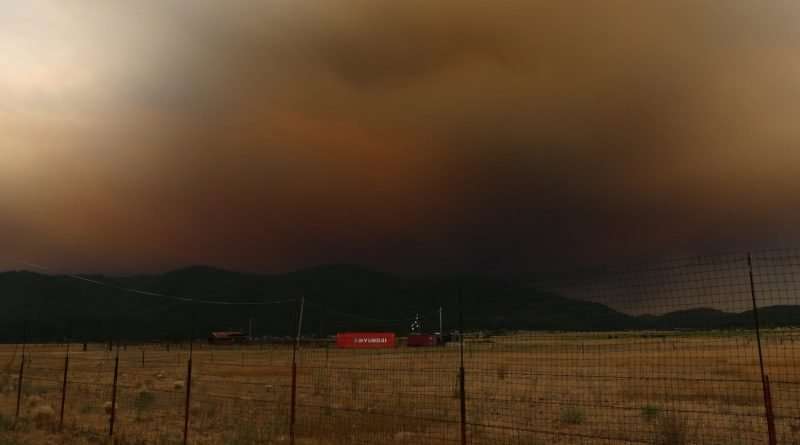 It was a very active day on the Dixie Fire as anyone in Plumas County could plainly see.

As of this evening the Dixie Fire is 40,500 acres and remains 15 percent contained. There are 2,409 personnel on the fire, but that number is going to increase — substantially.

During tonight incident’s command briefing, Chief Nick Truax said, “We put in a significant order today to start staffing up in the Plumas County area.”

That’s because Plumas County has become the chief area of concern for the Dixie Fire as crews are largely in the mop-up stage for the areas of the fire that would have impacted Concow, Magalia and Paradise in Butte County. Now both sides of the Highway 70 corridor to the Greenville Wye, which includes a host of communities, as well as Meadow Valley, and Bucks Lake are under mandatory evacuations, while advisories are in place for Canyon Dam, Prattville and the West Shore.

Sheriff Todd Johns issued an evacuation advisory for Canyon Dam, Prattville and the west shore of Lake Almanor during the briefing. He said it wasn’t due to the Dixie Fire advancing, but rather due to the number of lightning strikes coming from the fire that could ignite new fires. And because the smoke is so thick in the Almanor Basin, it is difficult to see any new starts. Infrared technology will be used tonight and more information will be shared as it becomes available.

Chief Truax also said that “south Lake Almanor and Canyon Dam is the area of most concern. You will see fire engines moving up there.”

He addressed “primary, secondary and contingency lines. “We have multiple contingency lines all the way out to Canyon Dam,” he said. “You heard about lightning strikes … any of those things can out pace us. I don’t want to cause undue alarm, but now is the time” to prepare.

As this fire has grown on multiple fronts, Truax said that a second incident management team would be joining the Dixie Fire because of the complexities involved.

Tony Brownell, operations sections chief, discussed the other areas of the fire. He said that planes put retardant down and crews are building lines to protect the Bucks Lake/Meadow Valley areas.

It was very active above Belden and in the Caribou area — extreme fire with lots of spotting. “A big push north got outside the containment line,” he said, but crews worked to bring it back.

High Lakes in Butte County became very active and burned parallel to Philbrook. Brownell said that crews are trying to direct it away from Jonesville. The Butte County sheriff has placed those areas under mandatory evacuation.

Brownell  said the fire was not moving toward Quincy, nor was it moving to Paradise or Magalia. He echoed Truax and said, “We are concerned about Prattville, Lower Almanor.”

Brownell, as well as meteorologist Julia Ruthford addressed the column that formed above the fire yesterday and today. “Yesterday it was about 30,000 feet,” Ruthford said.  Today’s was taller and the fire generated a thunderstorm over itself – manifesting lightning, gusty winds — that led to the concerns for Canyon Dam, Prattville and the west shore of Lake Almanor. There will be more unsettled weather tomorrow, but it isn’t expected to be as extreme as today’s. The weather is moving back toward hot and dry, with southwest winds during the day and northeast winds at night.

Click on the interactive map below for the latest information.https://buttecountygis.maps.arcgis.com/apps/webappviewer/index.html?id=9c92e0a2d2e0415fa5248d70cd644a82&fbclid=IwAR2UjOwHyEXXDS0VXFADWv3bTTqaDDD6HX28Nsl79U03J_uA3L1uEPgB94g