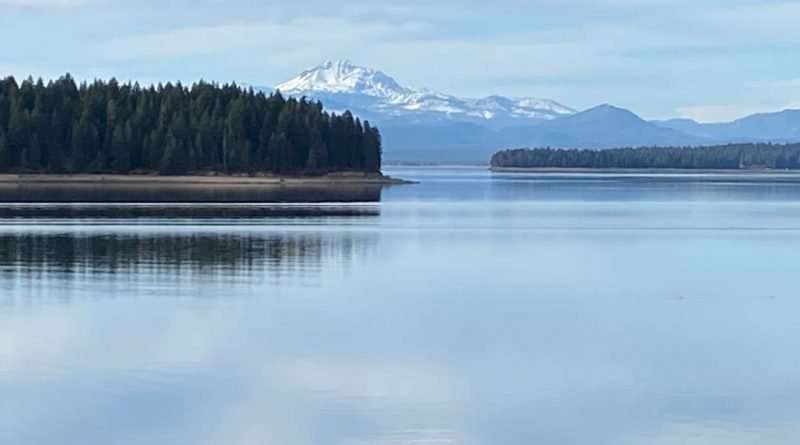 A warming climate is altering ecosystems worldwide. In California we are experiencing prolonged drought and more intense wildfires, which are impacting water quality in lakes and reservoirs. Fortunately, at Lake Almanor a dedicated group of concerned community members has commissioned water quality studies for the past thirteen years to monitor these impacts. They are the Lake Almanor Watershed Group (LAWG) and the 2021 water quality report is now available at the website of the Sierra Institute for Community and Environment (sierrainstitute.us). The report analyzes changes in temperature, oxygen concentration, electrical conductivity, transparency and pH, as well as plankton types and population density, at three lake sites at four times during the year. These same parameters, except for plankton and transparency, are also analyzed in the main tributaries to Lake Almanor: North Fork Feather River, Bailey Creek and Hamilton Branch.

The continued drought has meant less total precipitation, less precipitation as snow and, therefore, less runoff, resulting in warmer water temperatures. This has led to earlier establishment of thermal stratification (warmer water floats on colder water), which prevents deeper water in the lake from mixing with the oxygenated surface water. Decomposition of organic material in the deeper water uses up the oxygen that would be available to fish. In 2021 water in Lake Almanor at depths greater than 12 meters was devoid of oxygen by mid-July. These conditions persisted for longer than normal, putting the coldwater fish species, such as trout, under stress to find cold water with sufficient oxygen. Increased stress can result in decreased growth rate and/or mortality. The primary refuge for fish in late summer was Hamilton Branch, which was much colder than the lake and well-oxygenated.

Another impact in 2021 was due to the Dixie fire, which burned along the west shore of Lake Almanor and around the northern border of Chester, CA. Considerable amounts of fire retardant, primarily Phos-Chek, were applied along the western shore. In late October eight inches of rain fell in just a few days, followed by a blue-green algal bloom in the western basin of the lake. The bloom continued to grow and persisted into January 2022. The effect of Phos-Chek (ammonium phosphate) as a fertilizer in aquatic ecosystems is well documented and is known to trigger algal blooms. Although fall algal blooms have occurred in Lake Almanor in the past, this one was larger and longer- lasting. With less flushing of the reservoir due to the drought this year, there may be a spring algal bloom, as well.

Water quality studies at Lake Almanor have been financed for the last thirteen years by contributions from Lake Almanor Country Club, Lake Almanor West and others interested in the health of this lake. Data in 2021 were collected by trained community volunteers. All data and plankton were analyzed and the report was written by Dr. Gina Johnston, Professor Emerita, Department of Earth and Environmental Sciences, CSU, Chico. Donations to support this research can be made and the previous twelve reports can be viewed at the same website (sierrainstitute.us). Donate to LAWG’s water quality monitoring work here.

Dr. Gina Johnston is a retired professor of Limnology and Environmental Sciences from California State University, Chico. Her area of expertise is the chemistry and biology of aquatic systems. She has been conducting water quality investigations at Lake Almanor since 2009. Each year she produces a report that includes an analysis of the data that have been collected by the Lake Almanor Watershed Group. These are available on the Sierra Institute website (sierrainstitute.us).