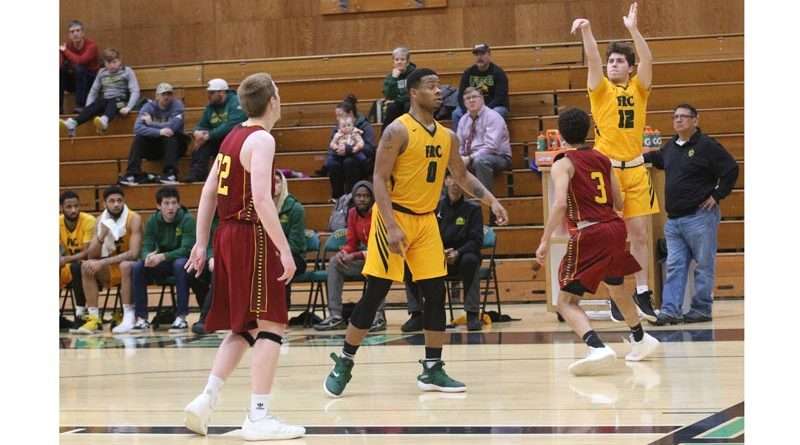 The FRC men’s basketball team move up to tie with the Butte Roadrunners for first place in the Golden Valley League after a win over visiting Shasta Knights, 57-47, Jan. 19.

The Eagles have been leaving their talon marks on distant courts as they traveled across Northern California competing, and their four-game winning streak made a 4-1 league record.

Head Eagle men’s basketball coach Randy Rick is hoping the crowd will come out in force to support the FRC team as they work to continue winning. “We want to keep the momentum going,” said Rick. Fortunately for Feather River College fans, the Eagles will next take on Lassen in Quincy this Saturday, Feb. 2, starting at 2 p.m. The last battle with the Lassen Eagles ended with the FRC Eagles flying out on top with a 87-79 win.

The women’s basketball game begins right after the men finish that same day at 4 p.m. The ladies are 2-3 in conference play and had a VERY close game the last time they met the Lassen Eagles. The score was 69-68 with the hosting Lassen Eagles emerging the winner. Let’s see how the Eagles do with FRC fans in the stands!

After two away games this week with Butte and Redwoods, the Eagles have just two home games remaining to finish conference play. The Eagles take on the Shasta Knights on Wednesday, Feb. 13, and for the last game of the season, they will be facing the Siskiyous Eagles on Wednesday, Feb. 20.