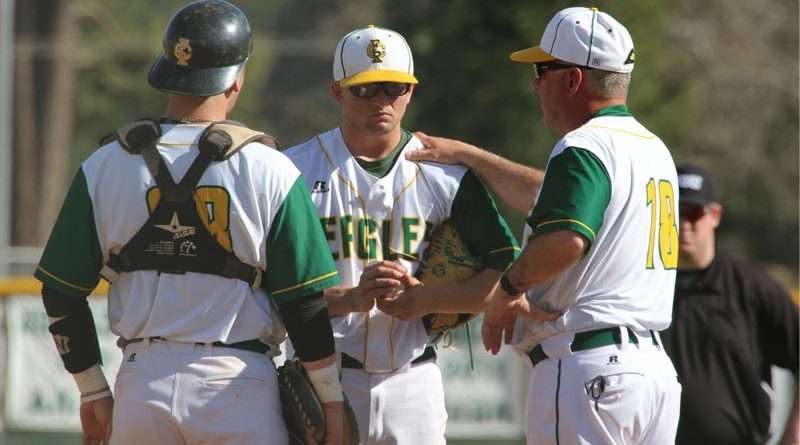 A pair of wins and a single loss to the Siskiyous baseball team last week finalized the Eagles’ perch at the top of the Golden Valley League, securing first place for Feather River College baseball.

The men were far enough in the lead last week for fans to be assured the conference title would land in the Eagle nest, but it wasn’t official until the men won two out of three in the last of the league games.

The Feather River men slammed the door shut on the Siskiyous Eagles in the first game of a three-game series, 25-8, on April 25.

It was a game to remember for Eagle first baseman Brandon Koszuth, who crossed home plate SIX times! Three of those trips were the result of his own home run hits. Centerfielder Tyler Kushima scored three runs, one as a homer, and another three runs were scored by third baseman Ty Brogden. Aaron Rapanot hit a homer and scored two runs in the game.

Jacob Miller pitched the majority of the game striking out three batters out of 23. Damien Awai pitched three innings and struck out four batters of 11. Tucker Weaver struck out two batters of the seven he faced.

The next day in game two of the three-game series, the Eagles bested the Siskiyous team 9-5.

In the third and final game of the series and the league regular season, the FRC men were first on the scoreboard in the second inning with a pair of runs. That must have fired up the Siskiyous’ team because they came back in the top of the third inning with four runs.

FRC took back the lead in the bottom of the third with three runs and led 5-4. Siskiyous scored a single run in the top of the fourth, tying the game and that’s the way it stayed until Siskiyous came back in the fifth inning to score three runs and break the tie, 8-5.

The FRC men were held scoreless by the northern Eagles, who came back in the sixth inning with three more runs, increasing the Siskiyous lead to 11-5.

It was a stalemate in the seventh inning with neither team giving an inch and no runs scored by either team.

In the top of the eighth, Siskiyous fired away scoring five runs and increasing their lead to 16-5. The FRC men were able to squeak a final run by the Siskiyous team who won the game 16-5, but were unable to change the tide and the first place Eagles took the league.FRC wrapped up the season with a Golden Valley record of 20-5 and 30-10 overall. The Eagles included an 11-game winning streak in their season and like a comet roll straight into Regional Playoffs. FRC hosts this Friday May 4 at 2 p.m. and May 5 at 1 and 3 p.m. The Eagles won, “the 11th time in the last 12 years,” said head coach Terry Baumgartner.