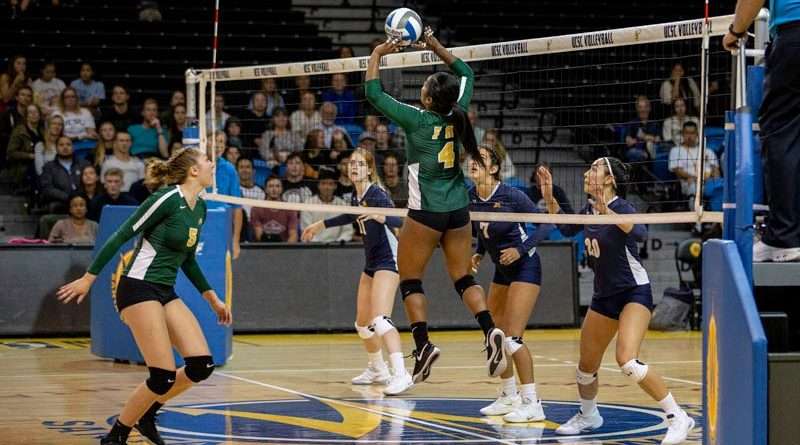 The dynamic Eagle volleyball team displayed the winning skills that have dominated their season on the court thus far. They won in Quincy at their first home game of the season over the Redwoods Corsairs by a score of 3-0. Individual game scores were 25-10, 25-14 and 25-6. Go Eagles!

It’s all conference for the balance of the Feather River College volleyball season, and fans will have a chance to see the mighty team strut their stuff. Their record stands at 2-0 for conference games and the Eagles are ranked as top dog according to the California Community College Athletic Association. They are the second ranked team in the whole state of California. The Eagles have already won first place in the prestigious Delta College Tournament as they pursue their 10th consecutive Golden Valley Conference Championship. Neighboring Butte and Siskiyous are the closest competition thus far.

Home games in October on the calendar are with Lassen, Friday Oct. 25; and Wednesday, Oct. 30, facing those Siskiyous Eagles. Fan-packed stands always encourage the FRC team to further excel on the court.

The FRC women had an amazing unmatched run of 21 straight wins this season leading into conference play. A pair of non-league losses after that 21-game winning streak (previously undefeated) tuned the team up for the run through the nine straight all conference games following. Each of the matches on the pre-season schedule was with non-league competitors around Northern California; what remains are schools that have yet to feel the sting of the 2019 Eagles volleyball team bite. The Redwoods Corsairs were the first crossed off the list.

The final matches of the season will be home games. Wednesday, Nov. 6, the Eagles meet the Shasta Knights and Friday, Nov. 8, is the final league game where the Eagles meet the Butte Roadrunners. Both games begin at 6 p.m. at FRC. Then, it will be on to finals for the Eagles playing their best games!