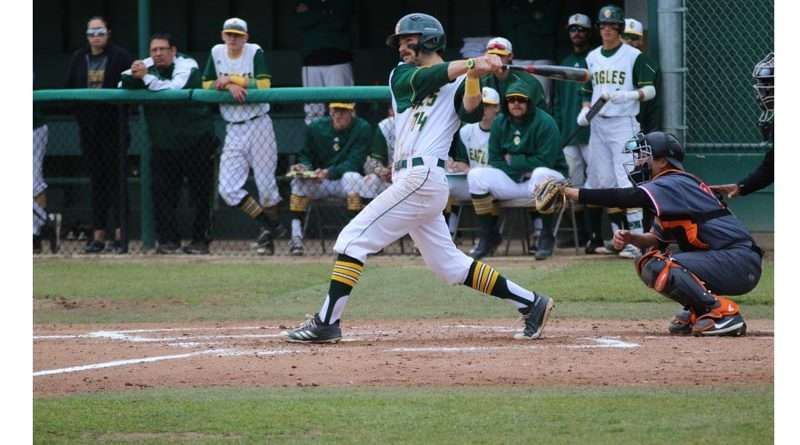 The Feather River College baseball team came out on top in a pair of games against the Lassen Cougars on March 19 and 20. The Eagles traveled to Susanville to challenge Lassen on Monday and won by a score of 7-4.

Pitching for FRC were Tucker Weaver, Jerome Bohannon and Sam Gamboa. First to score for the Eagles was returning sophomore Cole Fiori. The rest of the FRC runs were scored by Austin Youngblood, Vinny Zavolta with two, Connor Pradere, Gavin Broad and Joe Bath. RBIs were hit by Zavolta with two, Pradere with two, Brandon Koszuth, Bath and Ty Brogden each with one. Casey Croy and Pradere were each able to steal a base from the Cougars.

On day two, the Cougars ventured south to play on the Eagles diamond. “We are going to try and beat the weather,” said FRC head baseball coach Terry Baumgartner when he made an early morning announcement to move game time up by a half hour. And it was a good plan.

The Eagles and Cougars were able to play about five innings before any rain started to fall. Baseball fans ran to their cars to retrieve umbrellas when the droplets began to fall and were rewarded as the game continued through the weather. The Eagles beat the Cougars 9-2 in nine innings.

Striking out five Cougars from the mound was Brendan Taloen who faced 28 batters. Two other Eagle pitchers took the mound, Jacob Miller and Quinton Wiest.

Brandon Koszuth had a great game with four RBIs. Brogden hit two batters in while Youngblood and Zavolta each brought an Eagle across home plate. Joe Bath stole two bases and Pradere stole one. Eagle runs were scored by Cole Fiori, Zavolta, Jake Thomas, Chase Fernlund and Connor Pradere. Joe Bath and Ty Brogden scored a pair of runs each.

The Eagles have been racking up some miles as their season is fully ignited. Overall the FRC men are 16-8 with a 6-3 conference record. The home games will increase for local fans as the weather dries up.

Next up on the Eagle schedule is a game in Quincy against the Shasta Knights this Friday, March 30, at 3 p.m. and again Saturday, March 31, at 1 p.m.

After away games against College of the Redwoods and Butte, the Eagles will play the Butte Roadrunners in Quincy on Saturday, April 14, at 1 p.m. The Lassen Cougars will return to Quincy to play Friday, April 20, at 3 p.m.

The last regular games of the season before the Eagles head into championships (fingers crossed) are against the Siskiyous Eagles on the FRC diamond Wednesday, April 25, and Thursday, 26. The times for these two final games have not yet been chosen.