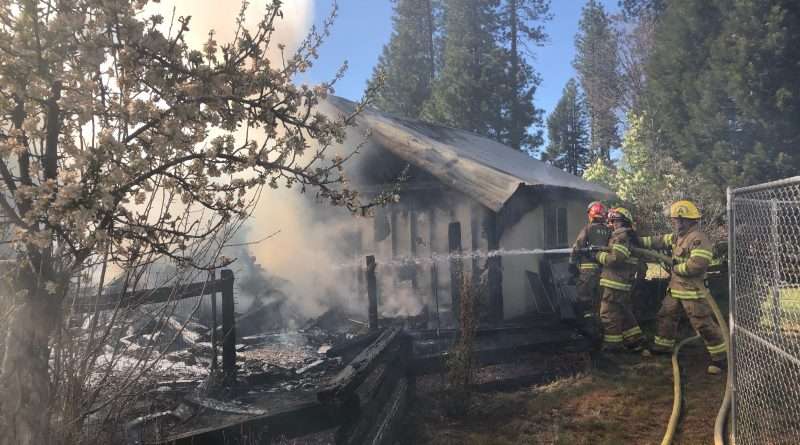 Members of the Quincy Volunteer Fire Department respond to the scene of a garage/house fire in East Quincy on April 28. Photo by Kim Eliason
News
April 29, 2021 Editor

The Quincy Volunteer Fire Department responded to a structure fire on Pine Street the evening of April 28, with assistance from the Meadow Valley Fire Department.

According to Fire Chief Robbie Cassou, it took about a half hour to knock down the fire that began in a woodshed and then spread to the garage and mobile home. “There was moderate damage to the home,” Cassou. The cause of the fire is under investigation.

This week’s fire occurred just 11 days after another fire broke out near a homeowner’s garage.

On April 17, Quincy Fire and the Forest Service responded to a vegetation fire on Ridge Run Road — the result of an escaped burn pile. While Quincy Fire was preparing to leave the area and return to station, Forest Service personnel spotted a fire beginning on the outside of a house, also on Ridge Run Road, that was unrelated to the vegetation fire. Quincy Fire engine OES 360 was first on scene and quickly knocked it down. Meadow Valley responded to assist.

Though that homeowner was away at the time, he was alerted to the fire when firefighters rang his Ring doorbell and he could see the flames from other cameras located on the property. Chief Cassou said that the garage suffered moderate damage.