Eleanor Faye Moore, age 85, a resident of Greenville, passed away on Monday, August 23, 2021 in Paradise, CA, while evacuated from her home, due to the Dixie Fire. 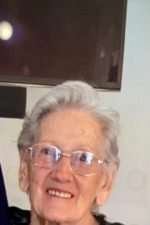 She was born in Colton, KY, to her parents, George & Marjorie Sexton, and was raised and educated in Rockhouse, KY. Faye was the eldest of eight children.

She married her first husband, Acie Walters in 1954, with whom she had two children, Pam and Tim Walters. Eleven years later she married, Gene Moore in Wichita, KS, and they made their home in Greenfield, IN. He fathered her next two children, Allen & Debbie Moore.

The Moore family moved to California in 1977 and became residence of Greenville; where the kids attended local schools and Faye was a member of the American Legion Auxiliary.

Gene preceded her in death on December 11, 2012, and she is survived by her daughters and their spouses, Pam and Dale Lyman and Debbie of Greenville, and Christ Woodruff of Fair Oaks; by her sons, Tim Walters and Allen Moore, both of Greenville, and by eight grandchildren, ten great-grandchildren and by her sister, Mallie Woods. A graveside services will be on Friday, September 3, 2021, at 1:00 p.m. at the Greenville Cemetery, Greenville, CA. Services are directed by Blair Mortuary, Quincy.