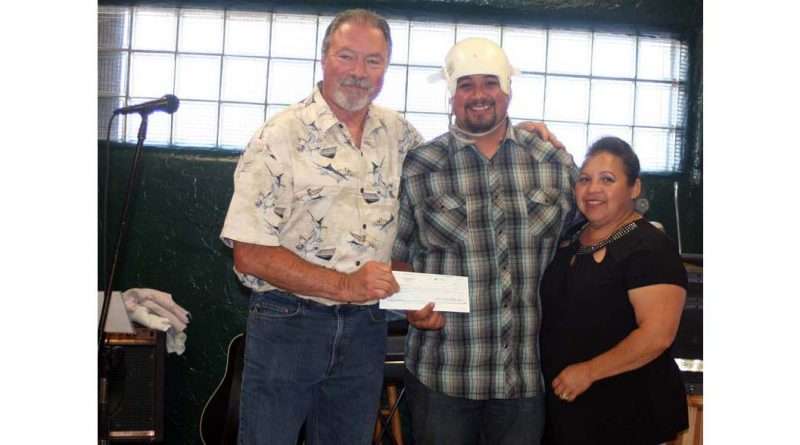 The Lake Almanor Elks Lodge was the venue to award two separate donations on the night of June 27, which included a

complimentary dinner featuring baby back ribs, corn on the cob and a dinner salad.

Wes Scott, Elks exalted ruler, presented a check for $2,000 to Chester resident Fernando Conchas, 24, who suffered a serious head injury nearly three months ago while helping to load tables onto the bed of a pick-up truck, that unexpectedly pulled away in the early morning hours of April 22, causing him to fall to the pavement.

Conchas required several days in the critical care unit in an induced coma at Enloe Hospital in Chico, but has improved considerably since the mishap.

Scott said a portion of the money benefitting Conchas came from the Lake Almanor Elks’ program, Wheel Around Lake Almanor, held every year to raise money for people with critical needs, and also from donations to the lodge during the year. Conchas had received $1,000 previously from the Elks soon after the accident.

The money donated will help go toward medical expenses that are not covered by insurance.

Conchas’ family members also attended the dinner at the lodge, including his mother Lucy Palanco and sister Sandi, as well as a number of friends and well-wishers.

Family members must drive to Chico twice a week to be with Fernando for his physical therapy appointments, said Conchas’ mother Lucy.

Although currently in rehab, Conchas is showing a lot of progress recuperating. By all accounts, his recovery has been remarkable.

Conchas said, “The therapists told me that I’ve been meeting a lot of their goals,” in his improvement.

His mother said she was very scared for her son when she first saw him in the hospital, but was happy to see him back on his feet and getting better every day.

Also receiving a donation that night was Boy Scout Troop 36.

“The Boy Scouts of America have a great program,” Elks Secretary Bud Wasson said to attendees. “I’ve been involved in it for

many years myself as a young boy. … Scouting is a very important program for the development of our youth.”

Thereupon, Wasson presented a check to Gregg Scott, advancement chairman for Troop 36, in the amount of $350 for camping equipment “to make their outings and adventures more enjoyable.”

Although not in attendance at the event, Garn Pringle of Lake Almanor Fitness Center had previously donated two pop-up tents, two ice chests, and two 5-gallon water containers to Troop 36 to show his support.

Gregg Scott said he wanted to thank the lodge members for their generous donation “for the years of support, both monetarily and otherwise.”

He further stated that the Boy Scout troop was always on the lookout for additional adults to volunteer, both men and women, to help lead the program.

“We would love to have anyone interested to come out to help and be an influence in their lives. … Sometimes it’s the only positive impact that they get.”