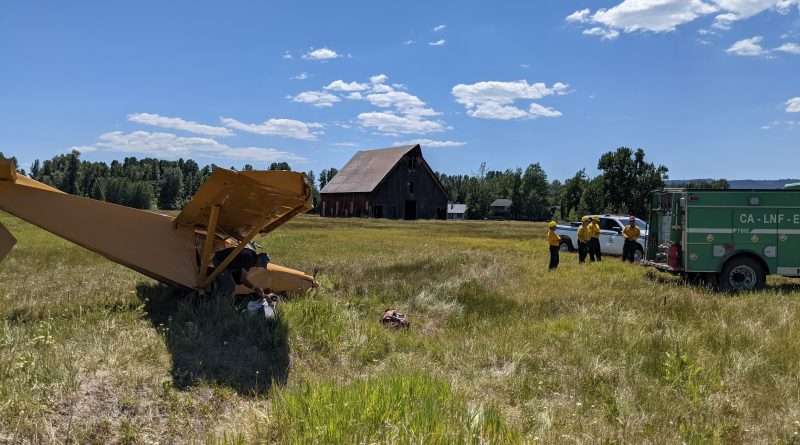 A plane makes an emergency landing near the historic Olsen Barn in Chester on June 26. The pilot escaped without injuries. Photo by Anthony Watts
News
June 27, 2021June 29, 2021 Editor

A private pilot walked away from a forced emergency landing resulting in a crash just before 2 p.m. Saturday, June 26, in Plumas County. The pilot said that he took off in a Zenith 701 aircraft from the Chester Airport just before 2, reached an altitude of 1300 feet and then began encountering engine problems, which he believed was due to a fuel issue.

He attempted an emergency landing in a large meadow just east of the Chester city limits, landing near the landmark structure known as Olsen Barn.

Due to roughness of the meadow, the plane flipped over on landing, but was able to be righted by emergency personnel on the scene. The Plumas County Sheriff and a U.S. Forest service fire crew responded to the incident, and reported the pilot sustained no injuries. The pilot, who declined to give his name, said only that he felt lucky to have been able to reach the meadow.