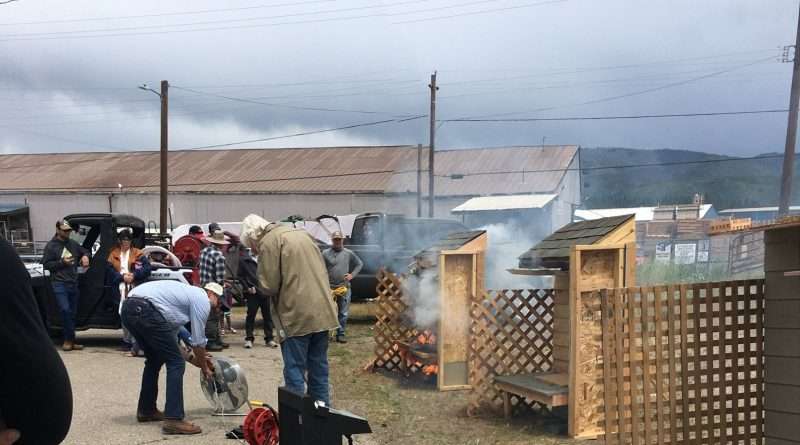 Ryan Tompkins, of the University of California Cooperative Extension, adds a little wind to stir flames during a demonstration of what can happens to homes not prepared for a fire event. Photo by Victoria Metcalf
News
May 18, 2021May 23, 2021 Editor
By Victoria Metcalf

Despite gray skies and the threat of rain, area residents turned out to the Plumas County Wildfire Preparedness Day on Saturday, May 15, from 10 a.m. to 2 p.m. at the Plumas-Sierra County Fairgrounds in Quincy.

Five speakers were lined up to give presentations on related topics during the event. Fire-related organizations also had booths providing information and literature on the importance of preparing homes and property to be fire safe.

Following a general welcome, Plumas County Sheriff’s Patrol Commander Carson Wingfield discussed what the public should know in the event of a wildfire. Many communities throughout Plumas County including residents and visitors have been exposed too often to the threat of wildfire. Just last summer several local communities were evacuated due to wildfires. Wingfield talked about Code RED and what to do during an evacuation situation.

Plumas County Animal Control Officer Alec Saez discussed how to evacuate animals, including when and where to evacuate livestock and pets.

Richard Stockton, one of the organizers hoping to have Quincy designated as a Firewise community, talked about recent efforts to form the group. Stockton and co-organizer Mike Flanigan represent two local insurance companies. Both know the difficulties local residents have in finding companies that will insure their homes and the numbers who have seen their policies cancelled.

The Keynote Speaker was Steve Quarles of the University of California Cooperative Extension program. He discussed how to prepare the home and assisted Ryan Tompkins, also of UCCE, on a burn demonstration.

The demonstration showed audiences what could happen when a fire reaches a combination of pine needles and a plastic gutter and other incidents when homeowners weren’t prepared for a wildfire.