Skip to content
Golf Results Sports
August 28, 2021 Editor
The 2021 Partners’ Eclectic Tournament was held on Aug. 12 and 19. In this tournament, the better net score of the partners counts as the team score on each hole, and may be improved upon during the second round.
Congratulations to first place winners, Mikie Burdick and Michele Violett, who scored a net 56. Second place was a tie between the teams of Holly Anderson/Jennifer Colley and Cheryl Brennen/Lois Childress, each with a net 59.  Third place went to Maureen Ford and Cathe Franck (61). And, there were “chip-ins” galore:  Two each for Teresa Becker, Cheryl Brennan and Jill Slocum; and, one each for Diane Forsberg and Cathe Franck.
The GMWGC’s annual Doe Dinner was held Aug. 17 at the home of Mikie Burdick on her large deck overlooking the Feather River. Each member brought either a hearty appetizer or a dessert to share. Beverages were provided by the GMWGC. A lovely setting was enjoyed and a good time was had by all.
The Whitehawk Ranch Ladies Golf the ladies golf club annual Invitational, “Hawaiian Daze 2,” was held Aug. 10. Although the tournament originally had a field of 64, it was officially cancelled because of smoky conditions. However, 43 intrepid golfers chose to participate in a mini tournament (minus the horserace and following dinner), headed up by Chairperson Susan Erne. Teams of four relied on the two best scores on each hole, and the following were winners:
— First Place Gross: Brenda Knott, Rita Byorick, Robbin Sanchez and Sharon Russell (blind draw)
— Second Place Gross: Kathleen Friedman, Marcia Zeigler, Priscilla Piper and Sharon Russell
— First Place Net: Barbara Competello, Naomi Laccarinio, Nancy Seibert and Sharon Chaney
— Second Place Net: Susan Erne, Chris Herauf, Laurie McKenzie and Charlene Swanson
— Closest to the Hole: On Hole 3, Barbara Competello (member) and Priscilla Piper (guest); on Hole 7, Marcia Zeigler (member) and Ginny Furr (guest); on Hole 11, Susan Erne (member) and Donna Lura (guest); on Hole 16, Deb Cavin (member) and Nancy Seibert (guest)
— Longest Drive was won by Barbara Competello (member) and Sharon Russell (guest).
Following play, all golfers enjoyed a delicious lunch catered by Backdoor Catering Co. of Quincy. Everyone is looking forward to next year’s event, hopefully with much better air quality!

Golfers still at it 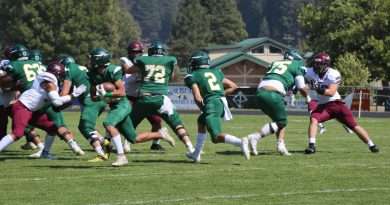