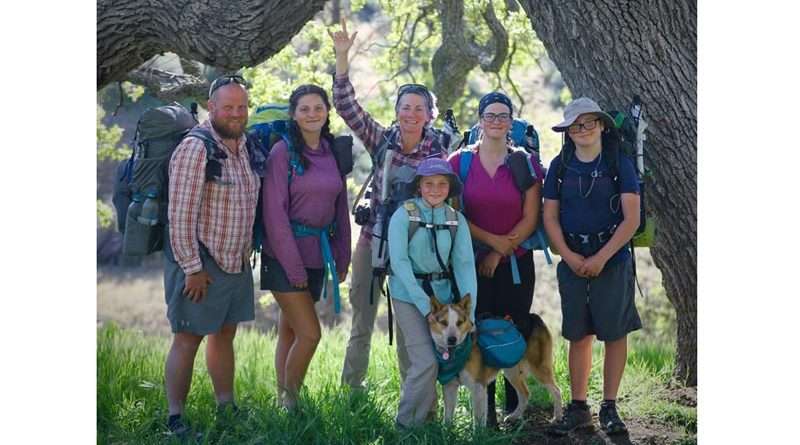 The Bennetts are a family hiking the PCT together. Key planners in the expedition are parents Adam and Mindi, ages 42 and 40, respectively. Their children are Sierra, 16; Kaia, 15; Tristan, 13; Ruby, 10; and young Muir the dog, 5.

The family started their journey in Campo, Mexico, on March 6 and made it to Kennedy Meadows in California on May 15. The snow was too much so they jumped the trail up to Burney and made the trek all the way to Ashland where snow was again a problem.

The rest of the family continued after arriving in Ashland via the PCT to travel off the trail up to Timberline Lodge, at the base of Mount Hood in Oregon. From that location they hiked the final leg of the Pacific Crest Trail to the end of the line in Canada, arriving July 18.

With a desire to hike every mile, the family then filled in the gaps by traveling back to Timberline to hike the PCT leg to Ashland and traveled then to Burney to fill in the last final missing gap south to Kennedy Meadows.

Feeding six people and a dog on the trail can’t be easy but this is how the Bennett’s have been doing it:

The Bennett’s have made a habit of eating the same foods everyday except when they happen upon a town and are able to add fresh fruit, veggies and … donuts, etc.

Mindi relayed that one woman, without malice said, “Some of your kids just don’t look like the athletic type.”

“I think we’ve surprised a lot of people by making it this far,” said Mindi. It is true that the family lacks the emaciated appearance that often accompanies the faces of travelers along the PCT. Perhaps it is tended to by having “Mom and Dad” as hiking companions along the trail.

All the Bennetts originally hail from Colorado except Adam who was raised outside of Seattle. Where is home for this amazing family? Possessions landed in Battleground, Washington, at Adam’s parent’s house. Mindi said they told the folks, “We are moving in with you when we get off the trail.”

Papa Adam, whose trail name is “Kidnapper,” is a construction contractor by trade and came up with the idea of a thru-hike six years ago.

“I loved the outdoors since my first backpacking trip in the Cascades,” Adam said. “It felt like a spiritual experience and I wanted my kids to have that, too.”

Mama Mindi, aka “Wildflower,” was on board right away. “For my kids to spend six whole months just with their dad, to me that’s super special,” said Mindi.

“Up until a week before we left, I was saying, ‘I’m not doing that,” said Kaia, aka Honey Badger.

The children are home schooled and each completed an entire grade in five months to give them enough time off their regular school schedule for the hike. It is easy to imagine that class has been in session all summer long.

“The kids said their initial reluctance was replaced by their own love of the trail, and they got along better than they did at home,” said Mindi.

“We fight less on the trail, we don’t have the energy,” said Sierra, aka Amazon, age 16. “Honey Badger has stopped punching me.” Honey Badger said, “ I’ve learned to do things the hard way.”

Still, there are struggles. Ladybug, the youngest, said she had a hard time not having any kids her own age to play with. Tristan, aka Gancho, said he often struggled with the monotony.

“He spent most of his time on the trail with one earbud in, listening to an audiobook. ‘Gancho’ has listened to 72 (and counting) audiobooks thus far on the trail,” said Mindi. “I had him count them up this morning.” With 450 miles to go after departing Donner Pass the morning of Sept. 6, the number is likely to increase.

The family stopped at Plumas District Hospital to pick up a package of supplies before getting back on the trail and that’s where Plumas News was able to catch up to the story thanks to a call from a PDH staff member.

The Bennetts are not only hiking the trail but also using their effort to raise awareness for a cause close to their hearts.

“Our goal is to raise $2,653 for Lifting Hands International to help refugee families (a dollar for each mile of the PCT),” said Mindi Bennett.  The link to support their fundraiser connected with the Bennett hike is liftinghandsinternational.kindful.com/kidsoutwild/team-mindi-bennett.