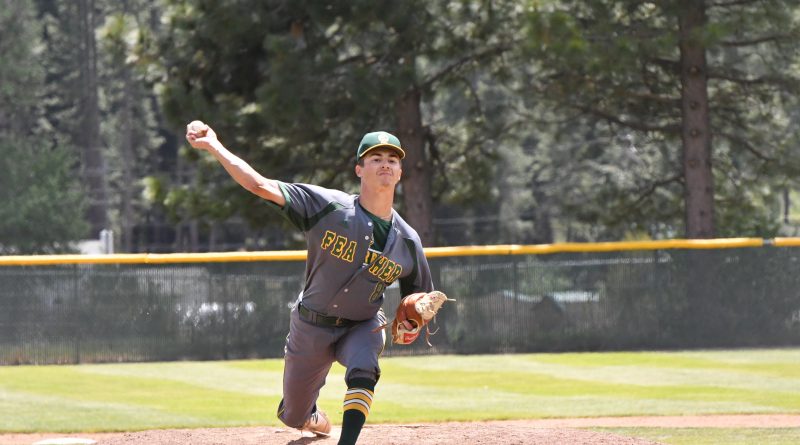 A former catcher, turned Feather River College (FRC) pitcher, will now have the opportunity to continue his baseball career at the professional level.

Golden Eagles’ closer, Jake Christianson, was selected in the 15th round of the Major League Baseball draft recently by the Tampa Bay Rays. Christianson was the 464th player taken overall and just the fifth player selected from the California Community College Athletic Association (CCCAA). He was the second player chosen from a CCCAA Northern Division school. The 6-foot-5 right-hander had pitched just two college innings prior to the 2022 season, coming to the program from St. Paul, Minnesota as a catcher.

“We are all super excited for Jake and his opportunity to compete at the highest level,” said FRC coach Terry Baumgartner. “This just proves that you can achieve your dreams if you are willing to put in the work to get better.”

Christianson blossomed as Feather River’s closer in his first season on the job. He led the Golden Valley Conference with eight saves, and went 5-3 on the hill with a 1.66 ERA. He pitched 38 innings and gave up only 21 hits while boasting a sizzling 55 strikeouts. His strikeout-to-innings pitched ratio was 13.03, third best in the entire state at the junior college level.

Known to FRC baseball fans as ‘Hoser the Closer’, Christianson had signed a National Letter of Intent with Division I Southern Illinois during the season. It is now expected that he will sign a professional contract with Tampa Bay.

When asked about his experience at FRC, Jake had this to say, “The thing I am most thankful for is the endless connections and friendships I made. The faculty, staff, FRC baseball coaching staff, and my teammates at Feather River College gave me the tools on and off the field to have success.”

Feather River College has had a baseball program for 25 seasons and has had 24 players selected in the MLB draft.

“Our coaching staff did a great job of helping Jake transform from a catcher to an elite pitcher in one year,” Baumgartner added. “Our program does a great job of developing players, and this is another good example of what we can do for kids who are willing to work hard to develop into an elite player. I could not be happier for Jake and his family. He has an exciting road ahead.”

Christianson and Feather River finished the 2022 season in the CCCAA Northern California finals, after winning the GVC and posting a 36-11 overall mark. They are listed ninth in the final state poll.