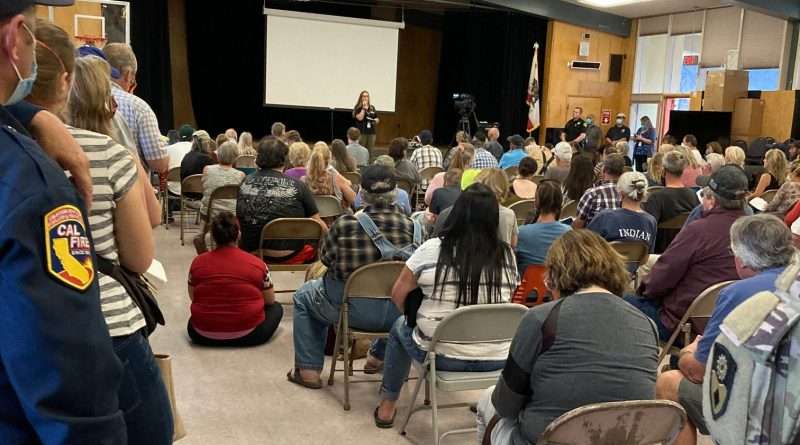 It was standing room only inside the Greenville Elementary School cafeteria, with many gathered outside, Sept. 15 as local, state and federal representatives outlined the steps being taken to rebuild Greenville and the assistance available to all who lose property in the Dixie Fire. Photo by Kevin Trutna
News
September 17, 2021September 24, 2021 Editor

It was standing room only on Wednesday evening, Sept. 15, as displaced residents of Greenville, Canyon Dam and Indian Falls gathered together at the Greenville Elementary School cafeteria to hear what federal, state, and local agency representatives had to say about next steps in clean up and rebuilding since the Dixie Fire obliterated Greenville and its two neighboring communities on (and before) Aug. 4.

Many displaced residents had not seen their neighbors since the second evacuation before the fire. According to some, it was both sad and comforting to see the community come together for the informational evening where directors and assistants of the various agencies introduced themselves and offered information and details about how to proceed in the disaster and the clean up in the fire’s wake.

This was the first community meeting put on strictly by agencies and not by community members or lawyers, (that we know of) to deal with Greenville. FEMA mobile intake trailers were lined up outside Greenville Elementary School. There’s also one in Quincy on East Main Street.

The evening began with District 2 Supervisor Kevin Goss—visibly choked up, welcoming everyone to the meeting with Plumas County Sheriff’s Deputy and Public Information Officer Chandler Peay acting as emcee.

“It’s heartwarming to see all of you. This is something we’ve never seen before and I hope we never do again. I’ve been heartbroken for days,” said Goss. He described working with volunteers to get some flowers planted out front of the schools and the path to the meeting.

“There’s not much else here. I want us to keep the faith,” said Goss. He advised his constituents to listen to what each speaker had to say and to ask questions and take information that was available on tables in the back of the cafeteria.

Next came Sheriff Todd Johns. He talked about the sadness of knowing that many people have already left town for good, but also he was encouraged by people from outside the area wanting to help rebuild. He mentioned a drive from a guy to rebuild the park so that Little League games could happen in the future and other ideas.

“I’m encouraged by the things I’m seeing. I’m ecstatic that we are all here. One foot in front of the other and we will rebuild this town,” said Johns as choked up as Goss had been.

Both men and the others that followed spoke of the disaster response after August 4 to present—much of it at a time when residents were not allowed in. Some residents later remarked that it was helpful and reassuring for them to do so. With so much misinformation and conjecture, having people who are in positions of some authority explaining the process set some minds at ease.

California Office of Emergency Services representative Ryan Burrs—himself a survivor of Hurriane Katrina—immediately acknowledged Sheriff Johns who wrote out a letter detailing everything the community would need.

“Because of that [letter] we are much further along. The letter was ready on day one,” of OES arriving in Greenville.

“We are one team, one fight. Disaster starts and ends locally. We are moving into the next phase. We need to get the debris gone. Timing is everything,” said Burrs.

Many of the disaster recovery speakers spoke of the necessity of moving quickly before winter sets in at the end of October.

Indian Valley Community Services District director and acting fire chief Bob Orange spoke about the new fire station to be built outside of town on Highway 89 across from Standart Mine Road and Cheney Street. The IVCSD has a five-acre parcel there and will have four bays for engines, a storage shed, mobile office building for water and sewage personnel and equipment (more of things to come were outlined in the IVCSD article of last week). He reminded the audience that a team of 10 – people half from Paradise and half from Redding – came up after the Dixie Fire left town to help with the community service district disaster response. Orange indicated that because of their expertise with their fires, Greenville is better poised for rebuilding. The water is not completely contaminated (the ability to use the water for bathing and drinking is supposedly coming soon). The water tanks are full and the system has been flushed out according to Orange. The IVCSD temporary office is in Quincy at 71 Trilogy Lane and the temporary phone is (530) 283-9761. Orange also brought news of a group in Clear Creek fundraising for Greenville with a rummage sale.

Jerry Sipe from Plumas County Environmental Health indicated that public water will be cleared for use by Sept. 17 in Indian Valley.

Rachel Wagner of the Cal Recycle Program told the crowd “we are here to help you recover.” She had been sent from the governor’s office. “What we want to do is be helpful and help clean up your property.”

Wagner, along with most of the speakers that followed her, spoke at length about Greenville residents needing to fill out the Right of Entry form which is available on the Plumas County website. Wagner stated that local contractors have begun the process of contracting with the state for clean up. Mid-October is the target date for clean ups.

Plumas County Health Department director Dana Loomis stressed knowing that residents are “eager to be on their property” but reminded the audience that significant “hazards are out there that are hidden or unknown: hazardous trees, electrical wire, burned structures with asbestos, toxic chemical dioxins, heavy metals.” He remarked too that ash particles are particularly toxic to lungs.

The meeting switched gears into FEMA based discussions. A Cal OES representative urged all affected residents to register with FEMA and to make sure to read all correspondence from FEMA as rejection is common when one does not have full documentation—but that doesn’t necessarily mean that a person would be completely disqualified. Sometimes disqualification can be as simple as needing a small piece of documentation before approval. FEMA representatives gave out the number (800) 621-3362 and encouraged residents to get applications in soon with Oct. 25 being the deadline.

The Small Business Administration was on hand to discuss low interest loans with a one-year deferment. The Red Cross reminded them that the Disaster Recovery Center in Chester  (101 Meadowbrook Loop Drive) is available with many resources including mental health specialists, replacements for medical needs (eyeglasses, hearing aids, prescriptions, etc.).

Midway through the meeting many different representatives of agencies emphasized that we are nearing the end of the beginning Phase 1 which includes removing hazardous, toxic materials burned . The message over and over again was to fill out the Right of Entry to begin the process of clean up. There was a presentation of the two different types of clean up—letting Cal OES and FEMA do it or trying to go it alone – the differences between the two were explained by two different people with the ending impression that going it alone was much more complicated. On the Right of Entry form, property owners can stipulate specifically what to remove and what not to remove (example a property owner wants to fix something themselves). Phase 2 includes removal of hazardous trees and all debris so that owners can reoccupy their property (prior to rebuild in temporary housing, RV).

The timeline put forth was Sept. 24 for assessments of property to start with Oct. 15 as the date for removal. Authorities stressed the process should be safe but quick with a target date of the end of January 2022 for completion of all debris from the Dixie Fire. No local landfills are willing to take the debris which means relying on the landfills in Anderson and Wheatland for acceptance of debris.

A Plumas Forest Service representative stressed that the FS wants to be there for residents and their needs at this time, including allowing for the collection of firewood on forest lands. She also mentioned residents wanting areas where dozer lines were made to be maintained as a future barrier for fire. She stressed wanting to hear from residents about their needs.

The biggest announcement may have been the temporary trailer  “village” to be placed north of Wolf Creek Road at the edge of Greenville. Plumas County Planning announced being cooperative about an emergency ordinance going before the board of supervisors to allow one mobile home or two RVs on a property with connection hook ups. Also the Planning Department is currently looking into pre-approved housing plans from 800 to 1,400 square feet so that rebuilding residents do not incur additional costs and so the approval process can be expedited.

For residents who may have felt in the dark before on the process or for those that felt like no one was doing anything (and there’s plenty indication online that many residents were feeling this way), the meeting served to make Greenville residents feel that their needs were being considered and that a plan is in place for all who want to rebuild and remain Greenville residents to do so.

The hub of resource information for everything touched on at this meeting and more can be found at the county website under Dixie Fire information: https://plumascounty.us/2868/Dixie-Fire-Information.