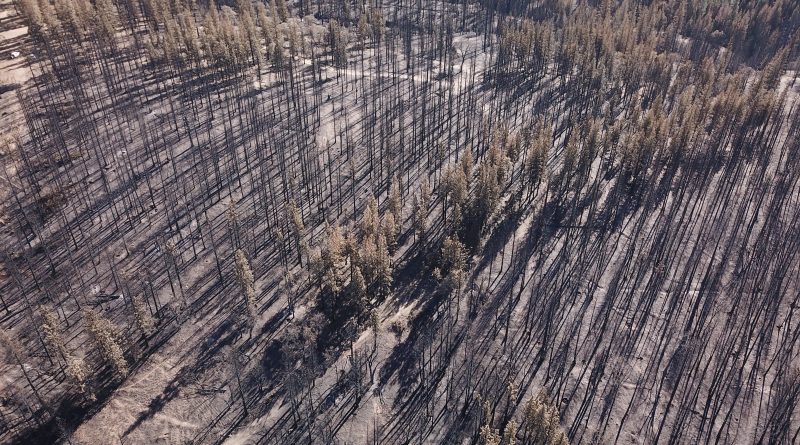 The aftermath of the Sheep Fire — a member of the public questioned the handling of this blaze during a meeting of four Boards of Supervisors. Lassen News file photo
News
July 29, 2022July 29, 2022 Editor

It’s not even August yet and once again, California is on fire — but not in our region. Maybe there’s a little glimpse of hope this year for Northeastern California residents.

Fire officials from the U.S. Forest Service and CalFire met with the boards of supervisors from four Northern California counties in a nearly three-hour meeting discussing all aspects of the wildfire issue at Jensen Hall in Susanville on Tuesday, July 26.

First up was Hannah Tangeman, a local rancher whose farm has been in her family since 1862  (the original site of Peter Lassen’s ranch) and whose property made up 13 percent of the acres burned in the Sheep Fire. Among her many losses, were thousands of acres of timber on Diamond Mountain, an historic old barn and miles of fences. She criticized the federal government’s response to the Sheep Fire — a fire that she said went from a series of lightning strikes that looked like “chimney smoke” that could easily have been put out on Aug. 17 to an “unstoppable fire” two days later that forced evacuations in and around Susanville. Originally part of the North Complex Fire, it burned nearly 30,000 acres before being fully contained Sept. 9.

“Part of me just wants to understand that,” she said, adding that the recent fires in Lassen County “changed the trajectory of my life.”

She said since 2014 she’s witnessed the struggles to get National Environmental Policy Act fuel reduction work done on Diamond Mountain, but that project suffered “delay after delay.” She said the 2020 Sheep Fire started shortly after the Lassen Fire Safe Council finally began a NEPA project, and the fire’s destruction could have been avoided if that work had begun years earlier.

She also said attention needs to be paid to the backfires set by firefighters. “Somebody shouldn’t be walking with a dirt torch torching tens of thousands of acres,” she said. “On a family, personal level, I see so many things, especially in the Plumas National Forest that could have, should have and would have been done, needed to be done, but were not done.”

Ralph (unintelligible last name) said he’s lived in the Greenville area for 70 years and did not evacuate during the Dixie Fire that leveled Greenville and ultimately burned nearly 1 million acres. He recounted how firefighters were just standing by their trucks on the highway. He said he asked them to help him put a fire out on his property and they said they couldn’t help him.

“If you’ve got firefighters like that, it’s no wonder we’ve got so many problems,” he said. He said he put the fire out himself “with a shovel and a bad arm. I don’t quite understand what the program was.”

He said at one point firefighters laid a hose and had several water tenders and water tanks ready, but then then they waited hours for the fire to burn the 100 feet to their line. “All day long you sat there babysitting it,” he said. “Come 3 o’clock, the breeze came up and blew past, and you guys were gone before the fire even crossed your line and burned half a dozen neighbors.”

He said one neighbor was fighting a fire on his house with a garden hose and a fire truck came and dropped a hose but never put any water on the fire. Luckily, the homeowner put the fire out. “Dropped the hose and left him standing there,” he said.

Ralph also commented on the firefighters’ shift change. He said in the morning — “the best fire conditions there ever was to put the fire out. Out rolls the night shift about 7 o’clock, then 10 or 11 o’clock, here comes the day shift. A whole four or five hours with no protection, no putting the fire out, or nothing. They talk about how dangerous everything is, but it looks to me like it’s more dangerous going up and down the highway, just parades and parades of vehicles, running up and down the highway to get back to lunch or breakfast or whatever it might be.”

He complained firefighters sat in their vehicles taking photos instead of fighting the fire. Gallagher interrupted and thanked Ralph for his comments, noting his five minutes of public comment had expired. Ralph said he hadn’t made half of the points he intended to make.

Charmaine Stevenson, executive director of the Fall River Resource Conservation District, wanted to “give a positive word. I understand what these people are saying, and I understand their frustration.”

She said her agency has begun a forest wide NEPA project with national forest supervisors and she’s learned some lessons during that process.

“Things need to change at the top,” she said. “It’s not the locals who have any control over this. There’s a lot of good people who work there, but unfortunately, a lot of times their hands are tied.”

“The whole system is broken,” he said. “It’s complex, it’s difficult to get through and then at the local level you have people who don’t seem to care.”

They also said the federal firefighters are rejecting the former “let it burn” policy and are now dedicated to put out every start as quickly as possible.

They said they also are working on strategies to reforest burned areas.

In addition, the agencies are working on grazing allotments — many of which are currently vacant to reduce a build-up of fuels.

In addition, the agencies have many firefighter positions open, and they’re actively trying to fill those positions as quickly as possible.

Plumas County Supervisor Kevin Goss asked why there was no CalFire office in Plumas County.

Scott Packwood, unit chief of CalFire’s Lassen Modoc Unit, said it’s been discussed for several years, but the process is complicated due to fire responsibility contracts signed with other fire protection agencies.

He said during his 10-year tenure, “It’s been a constant question … It’s a pretty big undertaking.”