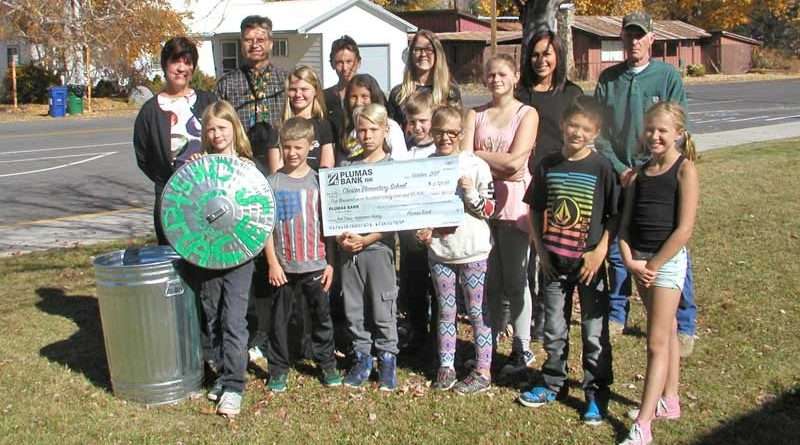 Chester Elementary School students accepted a presentation check from Plumas Bank of Chester for $2,729.85 on Oct. 30, destined for flood victims recovering in Texas and Florida.

Delivered to the school grounds for a photo op by Tracey Smith, Chester Plumas Bank branch manager, the check represents the amount of spare change donated by Chester Elementary students and staff for the “Fill the Can” Hurricane Harvey and Irma relief fund.

The school provided a 31-gallon metal trashcan to fill with spare change during the month of September and into October. The campaign was also open to the public.

At the end of the campaign, the money was brought to Plumas Bank, which hosted its own can (donated by Intermountain Hardware) for bank customers to contribute as well, and where all the loose change collected was counted for distribution to the Red Cross.

Interim Principal John Goolsby said the relief drive was a way to teach students the lesson of giving by helping those less fortunate than themselves.

“The kids were really great, they did a wonderful job,” said Goolsby. “Their efforts showed that even small contributions could add up to big things.”

He added, “When you work as a team, a lot can be accomplished.”

He also said he appreciated Tracey Smith of Plumas Bank and Intermountain Hardware for their contributions.