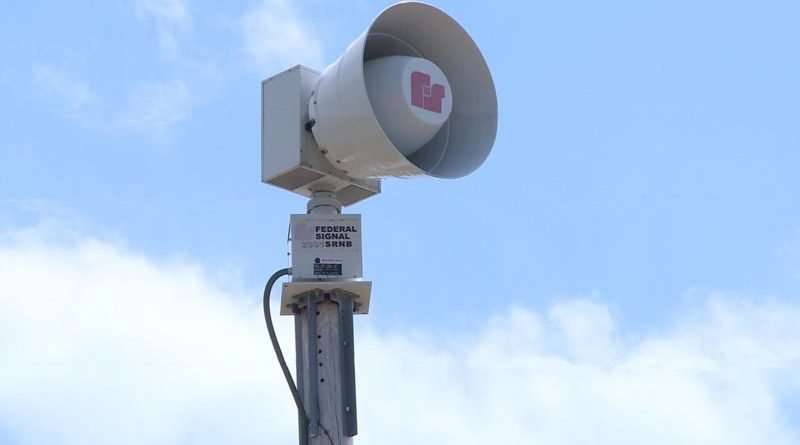 If you are driving in the Lake Almanor Country Club or Hamilton Branch area in the next few months and see a device similar to this on a pole in the air, do not worry; it is there for your safety. Hamilton Branch Fire and Peninsula Fire are having new emergency warning sirens installed in the event of a community-wide emergency. Photo submitted
News
August 28, 2019August 30, 2019 Gregg Scott, Staff Writer

HBPD approved the system at its regularly scheduled board meeting Aug. 14, and a week later the PFPD followed suit during its Aug. 21 meeting.

Gary Pini, fire chief for both departments, successfully applied for two separate $75,000 grants that will fully fund the two systems.

The Hamilton Branch system will deploy two multidirectional warning sirens, one near the fire station and one farther down Highway 147 along East Shore.

The Peninsula system will have sirens at both fire stations.

The successful bidder for the project is West Shore Services Inc., headquartered in Allendale, Michigan.

Both siren systems to be installed will be manufactured by Federal Signal; Safety and Security Systems using directional, rotating siren heads that emit 130 dB(C) at 100 feet.

The high-decibel output is designed to provide maximum coverage that is radio activated from the designated fire station.

Both systems are expected to be in full operation by the end of 2019.

Security measures like these, along with the recently activated Plumas County CodeRed Alert System are aimed directly at fire safety in the community, but also the growing concerns by homeowners and others about obtaining home loans and homeowners insurance in many rural communities.

The Plumas County Board of Supervisors recently sent a letter to the State Insurance Commissioner asking for a meeting to address the increasing costs and diminishing availability of homeowner insurance in the county.

Another shared interest of both fire districts is that both are looking for residents that would be interested in filling a vacant seat on the respective boards.

Hamilton Branch currently has an open vacancy on its board and Peninsula Fire will have an open seat as of Dec. 6.

If you are a registered voter within the boundaries of either the Hamilton Branch Fire District or the Peninsula Fire District and would like to be considered for the position, you can submit a letter of interest to the appropriate office or contact Holly Coons at 259-2306 for more information.