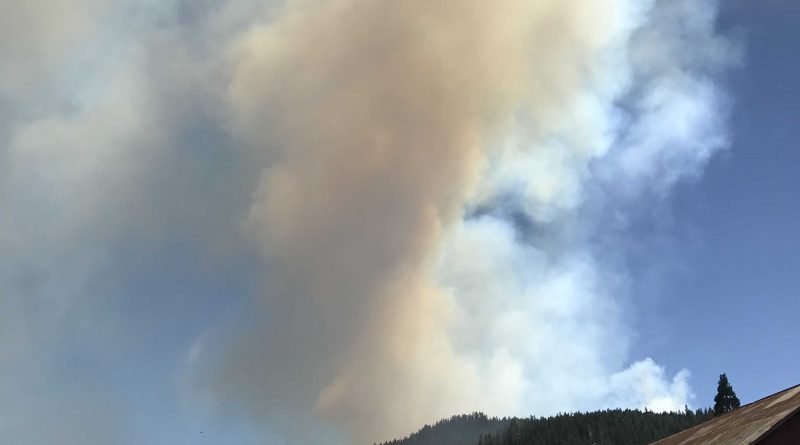 9 p.m. update – The footprint of the fires that are labeled the Minerva Fire, located just  south of Quincy, is about 900 acres. Now that it’s dark, residents of Quincy will see active fire. At this time (9 p.m.), no evacuations have been ordered by the Sheriff.

7 p.m.: The Forest Service is reporting that the fire has not crossed below 24N20 Road, also know as Watershed Road. The fire has not entered Boyle’s Ravine. East Quincy residents will likely see fire activity in the Mill Creek drainage this evening. Structure protection fire engines will be deployed to Quincy neighborhoods as a precautionary measure. Meadow Valley and Bucks Lake are currently not impacted by this fire. About an hour go, firefighters reported that the fire activity was on the ground and not in the trees.

Residents are asked to remain aware but there are no evacuation warnings or orders issued at this time.

5:20 p.m. The fire has spotted over Claremont Ridge and is in the Mill Creek Drainage. The Forest Service has ordered three strike teams for structure protection.

Sheriff Hagwood and the Office of Emergency Services advises residents of Quincy  to start making emergency plans for the possibility of evacuation. Residents are encouraged to shut all windows, collect all personal documents and photos, avoid use of air conditioning, and locate your pets and keep them nearby. The Sheriff will keep the Facebook page updated; there are currently NO excavations, please DO NOT call the dispatch center for updates.

Below is a link for a complete list of Pre-Evacuation Preparation Steps.

5:20 p.m. update: Per the Forest Service: The fire is no spotting over Claremont Ridge due to late afternoon winds and is established in the Mill Creek drainage. Additional resources have been ordered including three strike teams of structure protection engines as a precautionary measure.

2:50 p.m. update: The Plumas County Sheriff’s Office and the Office of Emergency Services are monitoring the situation closely. Sheriff Greg Hagwood said that planes and choppers are now using Bucks Lake for water. He reports that there are no calls for evacuations in Quincy at this time. It is hoped that afternoon winds will cooperate and that the fire will lay down tonight. Higher temperatures are expected tomorrow. There are reports of smoke throughout the county, as well as ash falling in some areas.

2:20 p.m. update: According to the Forest Service, no communities are threatened. They continue to fight the fires from the ground and from the air. The fires are burning in remote and rugged terrain.

Update: Saturday, July 29, 1 p.m.  According to the USFS, three of the fires within the Minerva Fire complex have grown together at about 50-60 acres. Aircraft are also using Bucks Lake for water.

Update: Saturday, July 29, 11 a.m.: According to the USFS: Firefighters are working multiple starts ( 5 starts from 1/4 ac to 10 acres) in a grouping being called the Minerva Fire. T23N, R9E, Sec 4 on the north side of Claremont. Fire is burning in brush and scattered timber with a moderate rate of spread. Helicopters and superscoopers are assisting firefighters on the ground. No known structure threats currently. Smoke visible from Quincy, Meadow Valley and Bucks Lake areas and beyond. Helicopters dipping from nearby water sources.

Plumas National Forest Spokeswoman Lee Anne Schramel said that there are a total of six starts, with the largest estimated to be at 5 acres.

Plumas County Sheriff Greg Hagwood said that a heavy lift chopper and two super scooper aircraft are drawing water off of Little Grass Valley Reservoir to fight the fires. The sheriff’s boat patrol is clearing the reservoir of boaters.