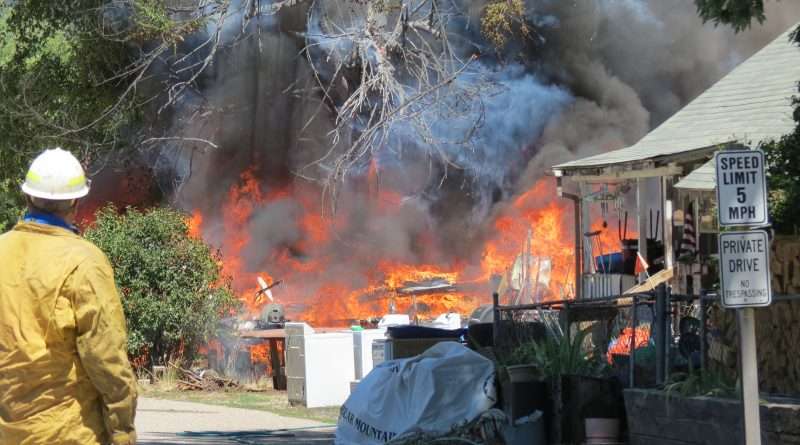 The fire just off Main Street in Quincy burns through multiple structures July 29, 2020. The cause of the fire was deemed to be human caused, likely the result of a piece of equipment or cigarette. File photo by Debra Moore
News
July 29, 2020July 30, 2020 Editor

Update 6 p.m.: Some crews are being released from the scene, but others will remain on the site overnight to mop up hot spots. One firefighter remains at Plumas District Hospital for observation. Edie O’Connor of the West End Theatre said that all of their props and costumes have been lost when their storage building was destroyed.

Update 3:35 p.m.: It’s been reported that four firefighters have been injured fighting the Main Street blaze. We are working to confirm that information. Sheriff Todd Johns said that he was aware of one smoke inhalation, one wrist injury and one heat exhaustion.

Update 3:15 p.m.: Supervisor Lori Simpson reported that the county building that houses the planning and building departments, as well as the assessor’s office, was evacuated as a precaution. Additionally a building that was used to house costumes for dramaworks and the West End Theatre also burned.

Update 2:03 p.m.: The fire, which burned one home to the ground, spread to the back of the crisis center, and also burned the brewery portion of Quintopia. Employees of Gott Power Sports began removing snowmobiles and other equipment as the fire drew close. Streets around the 600 block of Main Street are closed and traffic is routed onto Jackson Street.

Multiple structures are burning just off Main Street in Quincy with volunteer fire districts responding from throughout the county. The fire broke out at about 12:45 p.m. in structures behind the 600 block of Main Street. Smoke could be seen rising above the Plumas Crisis Intervention Resource Center, as the Quincy Fire Department arrived followed by backup from the Plumas National Forest. The Plumas County Sheriff personnel, the CHP, Plumas District Hospital and PG&E are also on scene. Residents are warned to stay away from the area. Personnel from Indian Valley, Graeagle, Plumas Eureka, Meadow Valley, Greenhorn and Beckwourth are also responding. Those on scene are also requesting help from Chester. Residences in the vicinity have been evacuated. This story will be updated as more information becomes available.