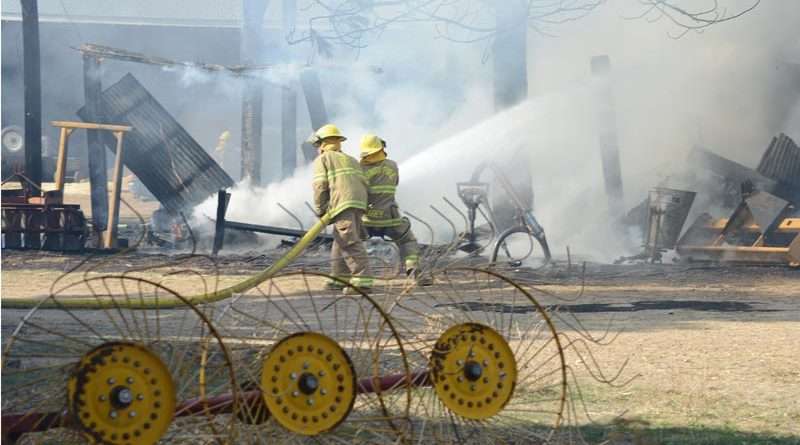 Two young members of the Quincy Fire Department continue to spray water on the remains of the hay barn at the New England Ranch on Quincy Junction Road on Friday, Oct. 25. Fire crews from QFD were joined in the response by a Plumas National Forest fire engine and crew. A dozer was kept waiting near Bell Lane further back on Quincy Junction Road in case it was needed for further protection efforts. Photo by Victoria Metcalf
News
October 30, 2019October 29, 2019 Victoria Metcalf, Assistant Editor

A fire started by a breaker inside a travel trailer not only destroyed a student’s residence but spread to a hay barn on the historic New England Ranch on Friday, Oct. 25.

The owner of the travel trailer was blow-drying her hair when the breaker tripped, said Quincy Fire Department Chief Robbie Cassou.

When the unidentified woman saw smoke and opened her refrigerator the fire took off, Cassou said. It was called in at 12:45 p.m.

Twenty-four firefighters, six members of the QFD support team, and the Plumas National Forest responded to the incident.

The PNF sent an engine and crew along with a bulldozer and water tender to provide perimeter support should the fire spread.

Although the structure, along with the travel trailer located on the west side of the barn, and a pickup were totally destroyed, it was the hay inside the barn that kept family members including owners Lisa and Lane Labbe, and firefighters on constant watch.

Sam Blesse responded on Saturday with his backhoe to try to spread the hay around and continue to knock down small fires and smokes, Cassou said.

No animals were lost in the fire. Plumas County Animal Control Officer Alex Saez responded to make sure all the horses commonly around the area were out of harm’s way.