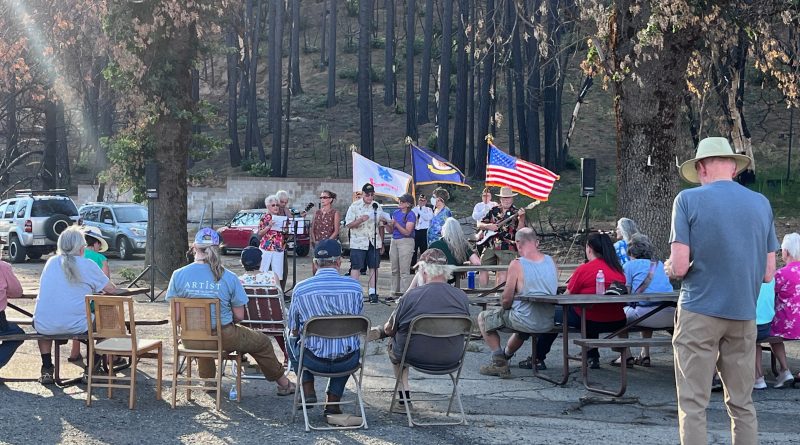 Greenville residents sing “This Land is Your Land” along with song leaders at the Thursday night memorial for Greenville. Photo by Meg Upton
News
August 9, 2022August 16, 2022 Editor

“We are one year stronger,” said Lara Wheeler.

Like the new oak leaves sprouting out at the base of charred oak trees everywhere in Indian Valley and along Highway 89, the residents of fire effected areas along highway 89 and Greenville are full of rebirth and change and this last weekend that manifested as a three-day memorial event.

Downtown Greenville along Pine Street was happening with a capital H. The Way Baby Bar served up libations every night with many community members visiting each other under the easy-ups and outdoor tables.  Every food truck and trailer we’ve mentioned was open from Thursday to Sunday it seemed –each serving up and often selling out of their menus.

Much credit goes to Lara Wheeler who organized The Paint The Town Greenville Street Art Fair which had residents near and far come to add some sidewalk chalk designs to the pavement.

“Two weeks prior to the event I asked Bobbie Elizabeth Stoy-Linford of Blinford Fine Arts what she thought we should do for an art-related event that community members could take part in and she suggested chalk-art. We spent a several days planning. Her family then suffered a tragic loss. Event organizers decided they would dedicate the event to Bobbie’s recently departed mother Tana Stoy,” wrote Wheeler on the Rebuilding Greenville Resource Center page. Bobbie Jones of Drawing on Earth and Plumas Rural Services Disaster Case manager for both the Camp and Dixie Fires joined in and organized the large collaborative piece and volunteered dozens of hours leading the project according to Wheeler. Jones shared techniques, provided guidance, and brought together many artists visions into a large beautiful piece.

The Street-Art Fair also had a contest along the theme of  “A Vision of Prosperity.” First place winner of the contest was “I ❤ You Greenville,” Hunter’s Pet Corner by Kimberly Price Hunter and her daughter Brandy Cedillos. Second place went to Pat Bradley for “Out of the Abyss” and the third place went to an anonymous artist for “I Forgive You Dixie.”

Along with the street art fair was a memorial event on Thursday, which was held in the parking lot of what was the American Legion Hall on Main Street. Appropriately, it was held toward the back of the property under a burned oak that simultaneously held on to brittle dried leaves and the new life of bright green leaves at the same time.

Long time resident and volunteer Marsha Roby coordinated the memorial events that included singing “This Land is Your Land” and “Amazing Grace” which included musician Tommy Miles on bagpipes wearing a sharp looking kilt. Levi Mullen provided an ethereal instrumental song and various speakers came up to give remarks including supervisor Kevin Goss who said “all the possibilities are right here in baby steps, in large steps.” He thanked Sue Weber and Lara Wheeler and “all the people” who made the events happen.

“The Remembering Greenville event was bittersweet. It was good to see so many familiar faces, sadness at remembering the loss and hope from seeing all of the progress made throughout this year,” said Roby.

Perhaps most poignant was Sue Weber’s remarks that “We are all warriors” and invited those hundred or so present to look at what they’d accomplished so far. She offered up that those present ‘yield to hope’ in the year to come and to feel how far we’ve already come as a community.

To close out the ceremony Dan Kearns came to offer up a spiritual closing to the day’s festivities. He did a Washoe invoked spiritual prayer to the four corners, which many found deeply moving.

On Thursday morning a procession of cars went from Belden clear to Canyon Dam with scheduled stops along the way and prayers performed by Dan Kearns of Taylorsville. This was chiefly organized by Ken Donnell as were the concerts with the help of Quincy musician Lance Barker.

On Friday and Saturday evening there were classical guitar concerts given by Jack Cimo in both Quincy and Greenville where other musicians and artists also performed songs, spoken word, and circus arts as a way to both express themselves and work through the trauma of surviving a fire.

It was clear by the end of the weekend that event planners are already thinking about next year’s anniversary and planning events around the two-year mark as well. All events, according to organizers, were well attended.

As Sue Weber had aptly put it when she spoke at the Thursday night memorial, “look around us; we are already back. Abundant blessings.”