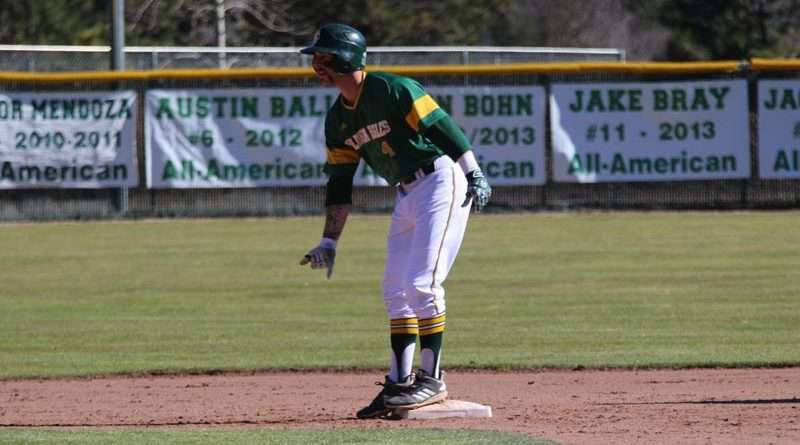 The Eagles had an 18-game streak running when they ran into the block wall called the Butte Roadrunners on April 12 in Quincy. Heading into the three-game series, the Eagles needed just one victory over Butte to secure the conference title.

Having beat the Roadrunners twice already this year, many fans, myself included, expected the first game of three would seal the first-place title for the Eagles, but the Butte baseball team had another vision in mind.

The stands were filled at Feather River College as the two teams headed onto the diamond. The parking lot was packed as winning FRC softball players were hosting a doubleheader of their own. Other FRC festivities at the nearby beach volleyball courts included a bounce house and international food tent. The campus was just buzzing with activity, and, expectations were high.

In game one of the doubleheader with Butte the men lost 13-10. The Roadrunners turned out to be completely stubborn and unwilling to give up, not one inch, during the important game.

From the sidelines fans were overheard during the competition reassuring each other with comments like, “We aren’t done yet,” and “It’s not over yet, just wait.” The stands stayed full until the last ball was caught. Disbelief fell over the crowd. The 18-game streak ended. The high-scoring game had definitely an edge to it.

Had there been too many conditions? If the Eagles won, as they have been, they picked up the conference championship. That was it; no one could catch them in the league. Maybe it just happened too quickly? The Eagles had flown right past the competition, almost in stealth mode. But clearly the second-place Roadrunners were paying attention now. And so were the Eagles.

The players and the fans all took a short break to regroup for game two of the doubleheader with Butte. We all returned to see the Eagles take the championship title in the second game. The stands were again filled with better-fed, but still anxious Eagle fans hoping to cheer their team to victory.

In game two, the Eagles lost again 6-3 to the Butte ball club.

The Roadrunners were first on the scoreboard in the first inning with one run. No one scored in the second inning. Butte scored in the top of the third inning and the Eagles launched on to the scoreboard with their first run of the game, 2-1 Butte. No one scored in the fourth inning. Both teams again scored a run in the fifth inning, 3-2 Butte. A repeat took place in the sixth inning ending 4-3. And then Butte did it, they scored two runs in the top of the seventh inning and no other runs were scored for the balance of the game. The scoreboard sat frozen for the eighth and ninth innings.

After a chance for a good night’s sleep, the Eagles traveled down the hill to face the Butte Roadrunners one last time on the Butte diamond for game three in the series. The Eagles actually fare better away than at home, winning 16-3 away and 10-2 at home. And win they did! The Eagles won the game they needed to win the Golden Valley League, 4-3, and finally were able to take down those pesky Roadrunners on their home turf. (Big cheer and a roar from the crowd in Quincy).

So, the trophy belongs to the Eagles. It did not come easy. The second-place Butte Roadrunners really gave the Eagles a run for their money, but in the end, the FRC ball club came out on top with a conference season of which to be very, very proud.

“We are very excited to win our 12th conference championship in the last 13 years,” said FRC head baseball coach Terry Baumgartner. “This group of players has done a great job all year and they have played well as a team.”

The FRC Eagles traveled to beat the Lassen Cougars 7-2 in a single away game April 19 and returned home to FRC to again beat the Cougars on April 20, 10-2, in the last FRC home game of the season before playoffs.

The final conference matches for FRC are today and tomorrow, April 24 and April 25, as the Eagles wrap things up in a doubleheader with the Siskiyous Eagles in Weed.

Because the FRC men have won the conference title, baseball fans will have a chance to see championship games on the Eagle diamond May 3 and 4. “We are excited to host the regional playoffs in Quincy,” said coach Baumgartner.

Next for the Eagles baseball team are the championship brackets for Region, Super Region, Section and maybe even State.

CCCAA State Championship games take place May 25 through 27 at Fresno City College. Mark your calendar; this could be our “really big year.”

* The only Eagle losses