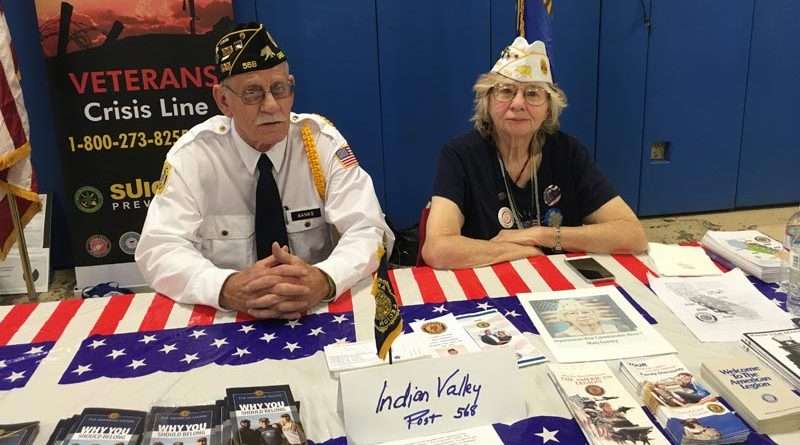 Indian Valley VFW Post 568 members John Banks and Marj Goosey are at the ready to answer questions from veterans regarding the American Legion and the benefits of belonging. Photo by Meg Upton
News
October 5, 2018October 3, 2018 Meg Upton, Staff Writer

Nearly 250 veterans and family members made their way to the Plumas-Sierra County Fairgrounds in East Quincy on Saturday, Sept. 22, to take part in the first-ever Plumas County Stand Down.

The event comes after a nearly yearlong plan was hatched to host an event for Plumas County and surrounding areas. Roughly 2,000 veterans live in Plumas County and organizers such as Veterans Service Officer, Jimmy Laplante hope to one day reach them all. The Plumas County Veterans Collaboration thinks they’re off to a great start.

Founder of the collaboration, Ryan Rogers, got the idea to bring a Stand Down event here after he attended one in Marysville more than a year ago. Monthly collaboration meetings brought the Plumas County event into being. The collaboration consists of all volunteers who are either veterans themselves or supporters.

The event consisted of three fairground buildings filled with information booths on various services in the county who either cater to or work with veterans and their families. There were giveaways of fresh produce, clothing, sleeping bags, new boots, backpacks, duffle bags, dog and cat food, and other items. Body and Soul and East  Quincy Barber were on hand to give haircuts in barber chairs.

Probably most important was the supply of information from people regarding veterans’ benefits. Everything from medical signups to scholarship for veterans’ children to onsite DMV processing.

Often veterans have a maze of paperwork to get through. The Stand Down aims to put all of it in one place for the day.

“It was great to see people from inside and outside of the county coming together to provide services for the veterans. Putting this thing together was very difficult logistically. However, we are happy with how everything turned out and are eagerly preparing for next year’s event to make it even better than this year’s,” said Rogers.

There were nearly 50 exhibitors in addition to people who donated time or resources to the event.

“We helped veterans who were either homeless, or facing financial hardships. We educated veterans about possible benefits they could be entitled to. The Plumas County Veterans Service Office enrolled numerous  veterans who never enrolled for VA benefits,” said organizer Scott Quade, a deputy probation officer and collaboration co-facilitator.

LaPlante attributed the success to so much local involvement, including the California High Patrol, the local Sheriff’s Office and other volunteers — including the Quincy Elks.

“The Quincy Elks were very much appreciated for their involvement and commitment to helping veterans in the community and provided a very nice lunch for all,” said LaPlante. Local markets across the county helped with the clothing drive.

There was also a program of events again utilizing veterans from throughout the county.

Quade provided the opening and closing of the event. Chaplain Sherman Baker did an invocation. Honor guard consisted of American Legion Post 568, Indian Valley, with Terry Schillinger. Vinny DeWitt and Shane Whitecloud led the Pledge of Allegiance and national anthem.

Where does the Stand Down get its name and what does it mean?

“The original Stand Down for homeless veterans was modeled after the Stand Down concept used during the Vietnam War to provide a safe retreat for units returning from combat operations. Stand Down afforded battle-weary soldiers the opportunity to renew their spirit, health and overall sense of well-being,” said organizers.

That’s how the Plumas County one is organized — bringing services and information to one place for better accessibility.

There’s another reason, too. Acclimating to civilian life is never easy. For veterans who served decades ago it’s a time to reconnect with other veterans. For recent veterans returning from Iraq or Afghanistan to a county without an active military presence it can feel disjointing. Call it reverse culture shock.

Events like Stand Down remind veterans that there are others around just like them in the same boat. The community outpouring reminds that they — and their service — are very much appreciated.

A second Stand Down in Plumas County is already in the works for September 2019. There’s a website for more information for those that