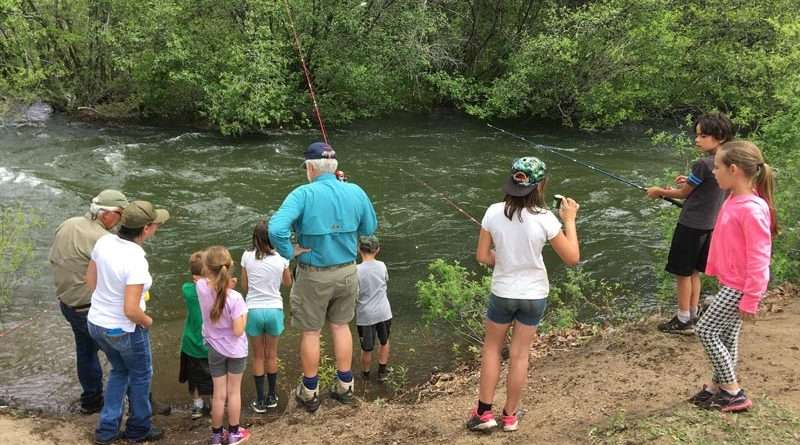 There is barely room for all the students to get to the river at one time, but with some mentoring and guidance by several AFA volunteers everyone got a chance to catch at least one fish. On this particular day you might even say, “The kids went catching.”
News
June 19, 2019June 23, 2019 Gregg Scott, Staff Writer

Wednesday, June 12, was a little different and a little more exciting for the fourth-graders at Chester Elementary School.

Fourth-grade teacher Nicholle Crowther, along with several aides, escorted her students over to Chester Park so they could check out another school, a school of about a thousand rainbow trout.

Amber Mouser from the California Department of Fish and Wildlife had an inspirational idea to expand the fourth-grade curriculum “Year of the Trout” to actually interact with the trout.

During their fourth-grade year part of the students’ studies cover the life cycle, habitat, recreation and economic impact on local communities.

Logic says it is one thing to read about fish or even see pictures of trout, but it is totally different to watch up close how they move when they are released in the river and, in this case, personally deposit them in the water via a 5-gallon pail.

After a short orientation for the students about what was about to take place and how to handle the fish, a CDFW fish transport truck pulled in and driver Willie Noble proceeded to hand net dozens of trout at a time into plastic pails.

Each of the students had an opportunity to walk the trout laden pails down to the river’s edge and pour them in.

The laughs and giggles were abundant as some of the fish tried to swim out of the water and needed to be tossed back by hand.

After everyone had a chance to “plant” their bucket of fish, Noble moved the truck down stream a little and delivered the remaining trout in a more traditional manner.

By poundage, there were roughly 1,000 half- to one-pound Darrah Springs Hatchery rainbows that found a new home in the Feather River.

Then of course came the frosting on the cake as volunteers from the Almanor Fishing Association set up over 30 fishing poles and offered tips on how to get some of those wily trout back.

Up and down the riverbank the boys and girls angled for that first hook-up and it didn’t take long. About five minutes and forth-grader Sammi White had her first fish.

Within minutes there were whoops of success from all areas.