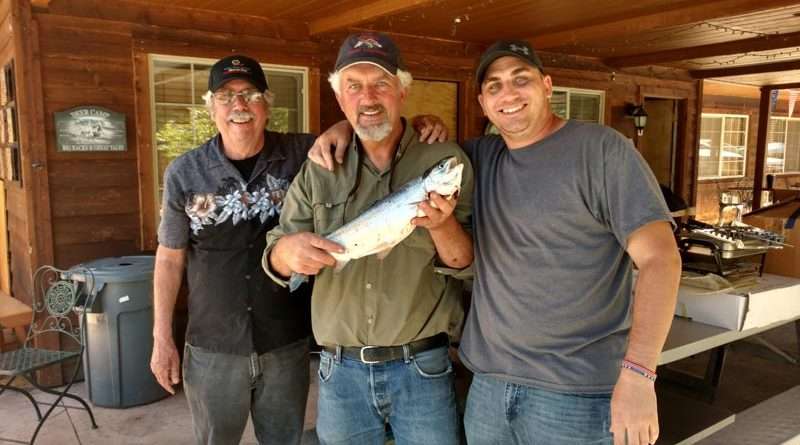 “Anyone can be a fisherman in May”

How’s the fishing at Bucks? “Excellent,” said Marcia Giller at Bucks Lake Lodge. Folks are catching “big browns and mackinaw,” said Giller, “No reports of any Rainbows yet.”

Gary Blanchard remains dedicated to creek fishing as it continues to produce well. Blanchard is using worms and Powerbait to catch four to five trout for dinner.

Trout plant this Sunday, May 20, should improve conditions in the pond considerably. That’s a fishing joke.

John Crotty of Almanor Fishing Association reported May 13 that the first of six “Field of Dreams” fishing trips for veterans was a success. Purple Heart recipients Robert Pattee and Christopher George enjoyed a day on the lake with Crotty. A 22-inch rainbow was one of the nine fish caught fast trolling Speedy Shiners off Almanor West.

“These guys are true American Heroes,” said Crotty after spending a day on the water with the two vets. The Almanor Fishing Association has plans to launch five more veteran fishing expeditions on Lake Almanor in 2018.

Fishdog Outdoors’ Ben Williams suggests practicing catch and release this early in the season and releasing fish where they were caught.

Fishing remains slow with water temps running 58-60 degrees. “Fly fishing the shallow coves in the early morning or late evening has been putting some fish on the rod,” said fishing guide Jack Trout.

Feather River is running at good levels above Graeagle and a little high below, advised Trout, “Look to fish the seams and edges, fish are at the top of the riffles looking for bugs.”

Out of the immediate area: Yuba River – Fishing is slow due to cold flows, with the lower elevation below Downieville best right now. For some dry fly activity on the surface in the evenings, try elk hair caddis or EC Caddis size 14. Striping some small size 8 or 10 dark streamers in some holes can be good right now.

Pyramid Lake – Water temps are starting to get into the low 50s with the warming weather. Try to fish the cloudy and windy days or the fish may not be in the shallows offshore much.

Bring a floating apparatus to get you out to the drop offs as a backup. Usual flies such as Mahalo Nymphs, Albino Winos, Olive Wolly Buggers and Popcorn Beetles have been getting the grabs.