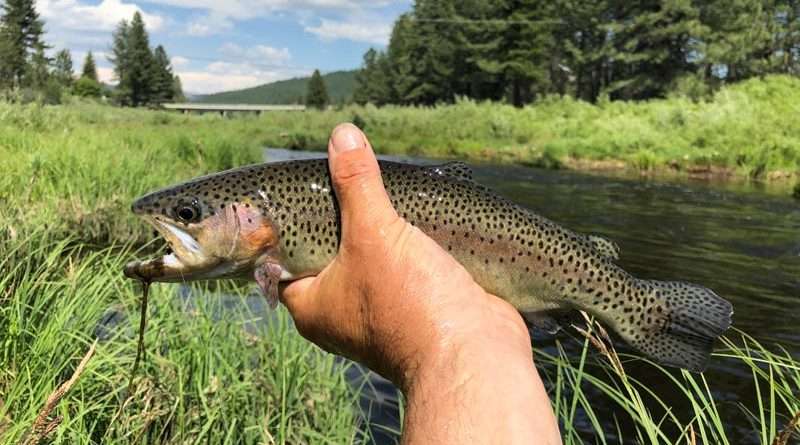 Steve Monteverde has been manning the store up at the lake for a long, long time. Last year he said it was his last year. In the off chance he could refer us to someone up at the lake for a fishing report, I called the number. Guess what? He is back! “This is God’s country,” said Steve. “When it came down to it, I missed it and wanted to be back here.”

On the fishing, “It’s been good, they just stocked the lake this morning,” said Steve. The lake was stocked June 21 with brook trout and rainbows.

“Folks are also catching bass and this morning a guy caught a 29-pound catfish,” said Steve. Wow! Welcome back to Antelope.

The water has warmed up, the bugs are hatching and the fish are biting. “Everything is great, folks say they are catching their limits,” said Rebecca Guereque up at Bucks Lake Lodge.

Madison Hood at Goodwin’s Store said, “I hear that the fishing has been really good from everyone that has come in to the store.” Fishermen are stocking up on nightcrawlers mostly for bait

Last week Bob Parry told us, “The lake is starting to turn over … You gotta be there when they are hungry. Lately it’s been a 10 to 11 a.m. bite.” Folks are having luck with green sparkly marshmallow or rainbow colored PowerBait. “The fish coming out of there are beautiful,” said Parry, “but they always are.”

Mark Tieslau at Blairsden Hardware Store gave us his first report since the snow broke.

“Fishing has been real good,” said Mark. Sardine was triple stocked because there was too much snow to get into Gold Lake or Packer or Salmon, but it’s “all better” now.

Gold Lake has been stocked and the docks are all in the water. Packer Lake and Salmon are both a go as well. “Gold was stocked last week and folks are catching Mackinaw up to 10 pounds,” said Mark. “Don’t know about shore fishing, but the fish are just below the surface at about 5-10 feet.”

“Fishermen at Sardine have been catching many limits with anything from the boats,” said Mark. “Dick Nite, Panther Martin to Rooster Tails,” they are all catching fish. Now that’s a report!

The big story on the water this week is the third annual Veterans Fishing Day that took place June 23. “We had over 40 boats taking close to 100 veterans fishing,” said John Crotty. There were at least two veterans from World War II participating, one is 94 years old and the other is 96. Folks on the lake were encouraged, “If you are on the water, please acknowledge the fishing fleet of veterans and thank them for their service,” said Crotty.

The big day was put together over a period of months with the coordination of Almanor Fishing Association and the many, many hands of local guides and fishermen.

Almanor is full with water lapping up onto the blacktop at Canyon Dam. In fact, the ramp is up as high as it will go, and you have to step in two inches of water to get to the ramp. Road construction continues 70 through the Canyon with extended road closures. “Please check with Caltrans for current road updates,” advises Crotty.

Have no fear, there are still fish in the lake after a successful derby with 78 contestants June 15. Folks fishing with worms reported fishing was “red hot.”

“We just got 4,000 pounds of fish this morning,” said Jeanne Graham at J&J Grizzly Store. “Trolling is doing the best, they were having to work hard for fly fishing yesterday.”

The lake water temperature was 67 degrees at Honker Cove where they planted the fish. “That’s a good temperature,” said Jeanne.

J&J Grizzly Store hosted the sixth annual Spring Derby June 15 to support firefighters. The winner of the derby was the Eastern Plumas Rural Fire Department, but the people with the biggest fish were Ron VanAssen, Ken Stoner and Larry Tristano. For juniors:  Kaiden McKinney, Jackson Williams and Ryu Crank. In the team competition for Dad and Me: Chris and Collin Jacob, Luke and Levi Crank, and Robert and Ella Garcia.

The river is still running high, but the trout are hanging on the edges and are not in the main current.

“Caddis hatches start about 10 a.m. and the trout are taking them until about 2 p.m.,” said fishing guide Jack Trout. “Look for sections of river that are not sandy bottom, but are rocks, that’s where they are feeding on bugs,” says Trout. Streamers are working also, no sink tip needed. From here out the river will get better and better each week. Hatch starts back up about 5 p.m. and continues until dark.

“Fish the seams and edges in the foam line and riffles,” was Trout’s last suggestion.

The creek is high, but fishing is good with heavy nymphs. Below Quincy is best, the creek is slowly getting into shape. “This is the time of year when huge brown trout are caught,” said Jack Trout. Early morning and late afternoon is best for bigger trout. Work the tail outs of pool with streamers; you might get a surprise grab that’s very large.