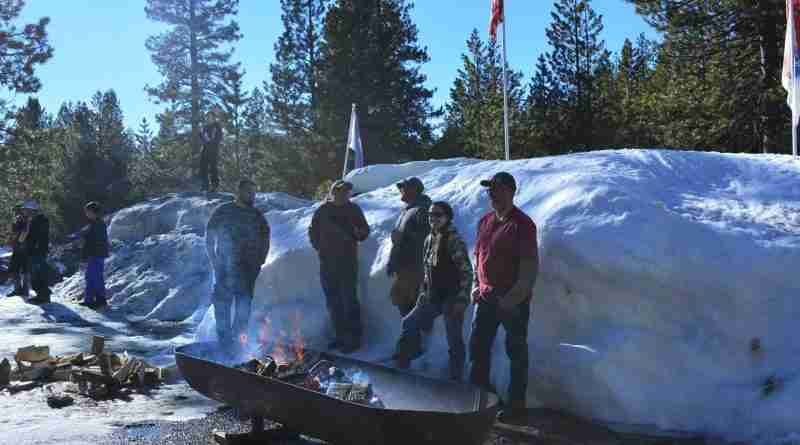 Not even a pile of snow chills the buoyant mood at the Lake Davis Ice Fishing Derby Feb. 19 as fisher folk gather around a smoking fire pit to share fish tales after a cool morning on ice waiting for the BBQ line to thin and the drawing to begin. Photo submitted
Fish Bits News Sports
February 28, 2022 Editor

The Almanor area received a slight dusting of snow last week and there is a 30 percent chance of rain this coming Wednesday and Thursday, March 2-3. Lake level is currently at 4480.06 feet, up slightly this week. Bailey Creek has had water flowing for the past three weeks although the flow is minimal, at best. Snow remains in the shaded areas around the lake. The cold weather last week resulted in a drop in water temperatures and new ice formed once again around the lake. Yesterday, Feb. 27, water temperatures were 38 degrees.

Hamilton Branch and the coves around the dam remain the best shot at catching fish from shore. “Power bait and crawlers are always the top offerings,” said John Crotty of Almanor Fishing Association. “Fly anglers are also picking up fish in both locations.” Trollers are targeting fish on the south end of the lake where fishing has been “ok,” but the fish caught are in great shape and hard fighting.

AFA is the group whose volunteers have been tending to thousands of hatchlings through winter in preparation for their release to stock Almanor this spring. Volunteer AFA members have been feeding the little darlings twice a day all winter long. “Almanor is known for big browns, many are caught each year, especially this time of year; if you are fortunate enough to catch one of our trophy fish please treat it gently, take a couple of quick pictures, get measurements if you want a wall mount and return it to the water ASAP,” suggests Crotty.

All local major roadways are open with delays along 89 and 70. Cleanup is ongoing in Greenville with most of the truck traffic heading down the canyon on 89/70. The Canyon dam boat ramp remains the only available public boat ramp.

The turnout for the annual Lake Davis Ice (or no ice) Derby was fantastic. Photos have been posted to the J&J Grizzly Store Facebook page and it looks like one of the happiest events recorded. There was ice; there were fish; it was dry; the BBQ was tasty; and everyone had a good time, which they usually do, but this year looked particularly festive. The event turned out “great” according to Jim Graham of J&J Grizzly Store.

Three pounds and 20 inches was the size of the three fish that won first, second and third place prizes Feb. 19, each separated by fractions of an ounce. Drawing winners looked especially pleased with their prizes. Stomachs full of flavorful barbeque served up by Eastern Plumas Rural Fire District helped put smiles on everyone’s faces. Overall the day was very successful as the annual fundraiser for the men and women who fight fire locally. “The store has been really busy ever since,” said Jim. Well, that’s a good thing.