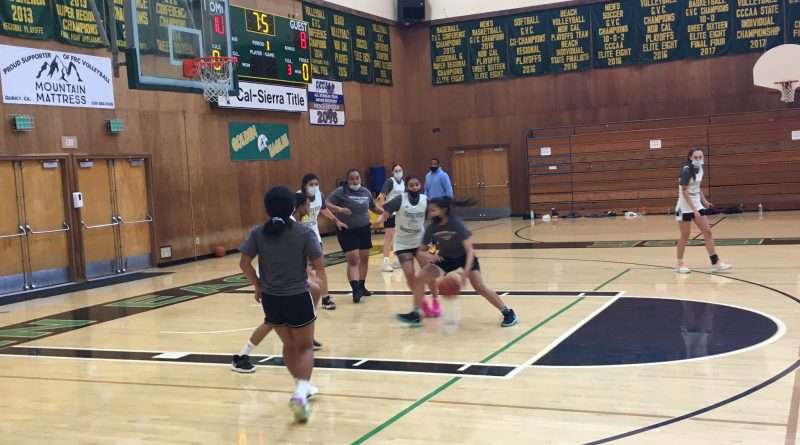 The Feather River College women's basketball team practices Feb. 24 in the FRC gym. The first game is scheduled to be played at College of the Siskiyous on March 12. Photo submitted
News
February 24, 2021February 28, 2021 Editor

Feather River College is once again alive with activity as students have returned to the dorms (albeit with reduced capacity) and athletes have taken to the practice fields.

“It’s been refreshing to see activity on campus,” said Derek Lerch, FRC’s dean of instruction, “but it comes with a number of challenges.”

Those challenges include accommodating students with reduced housing capacity (one per room, with just a few exceptions) and regular testing.

Before a student was allowed back on campus, he or she had to be tested for coronavirus. Feather River College worked with Plumas District Hospital to handle the initial tests and will continue to do so for symptomatic students or those who have had known contact with a positive individual. FRC set up “Safe 4 Play” that requires all students to input symptoms before they attend class. Anyone with coronavirus-like symptoms is tested.

And for student athletes, the testing is ongoing. All of the student athletes were tested when they moved in; then again one week later. They were then placed into pods, and had to have two negative tests before they could practice outside of their pods. A positive test would have required a third week of waiting to practice together.

“We passed the second negative week,” Trutna said during an interview Feb. 24. “So the teams are now practicing together.”

Twenty-five percent of the athletes will continue to be tested on a rotating basis during practice sessions and 100 percent must be tested within 48 hours of competitive play. To accommodate this strict regimen, the college contracted with Virus Geeks to provide onsite testing at a cost of $37 per test.

“All of the work behind the scenes to get to this point is amazing,” Campa said during a Feb. 24 interview. By the end of this week 406 COVID tests will have been administered. As of last week, 274 tests had been completed, with two students and two staff testing positive. This week the spring sports — softball, baseball and beach volleyball — will receive their second test, which could clear them to practice together as a full team, just as football and basketball are doing. Campa said that rodeo is also being tested this week.

Trutna said it’s been interesting to hear the coaches decide which athletes should be included in the same pod. “They don’t want to put all the pitchers together,” Trutna said of baseball, for example. If someone in a pod were to test positive, that would jeopardize all of the other pod members’ ability to play.

Carlie McCarthy, FRC’s dean of student services, said of the pods, “They are in very strict cohorts. So even if they are part of a football team, they are part of a cohort.” She cited being in the same study hall as an example of an activity they would do together.”

In addition to the testing, Campa said the college is doing everything it can to mitigate the risk of anyone contracting COVID. For example facilities are fogged between practices and there is extensive sanitizing of equipment. Personal hand washing and sanitizing are also required. “What we have been doing is unprecedented here,” she said.

“We are doing what we have to do to protect the community,” FRC President Kevin Trutna said, as well as those on campus. In an effort to be totally transparent, he notifies those on campus and in the community when there is a positive test, while protecting the identify of the individual.

Lerch said, “Our plan for the start of the spring semester has basically gone according to plan. From stay home to purple tier to red tier – our plan stood with those changes.”

By Debra Moore [email protected]umasnews.com Destination weddings are growing in popularity in Plumas County and now there is another venue available…