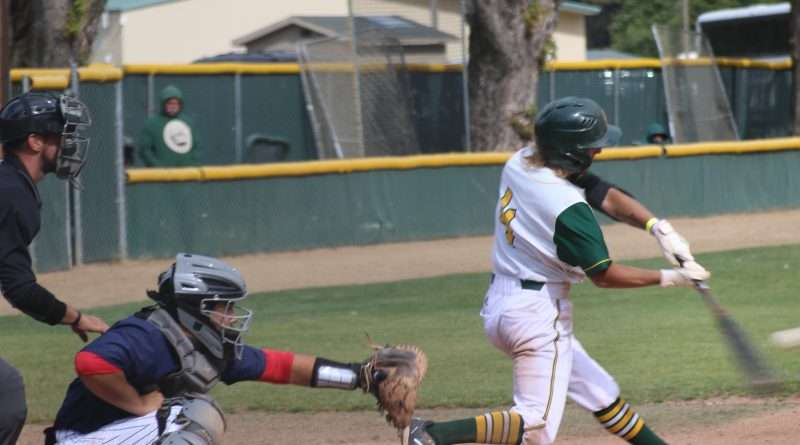 Garrett Damico, no. 4, lands a solid RBI hit off the Siskiyous pitch. Third baseman Damico is from Reno. Photo by Mari Erin Roth
Sports
May 24, 2021 Editor

College baseball fans had stars in their eyes watching the Feather River Eagles take on the visiting Siskiyous team, also Eagles. Feathers were flying and talons were bared but FRC, won both games of the doubleheader, 10-9 and 7-6. “Our guys did a really good job of sticking together thru some adversity late in game one to come back from 6 runs down to pull out the win,” said Feather River College head baseball coach Terry Baumgartner. “In game two we had another great team effort as we pulled out the 1 run win.”

In the victorious game two at Feather River College, pitching came from Dean Aduddell, Eamon Velarde, Drew Baumgartner, and Chace Ostermeyer. Velarde pitched 3 innings and struck out one batter of 14 faced. Aduddell to the mound next for 3 innings to face 13 batters and strike out 4 Siskiyous batters. Baumgartner pitched and inning to 5 batters and struck out 2 batters. Ostermeyer took on 2 batters.

Pauly scored two runs. Larranaga, Gray, Thomas, Tyler MacIntyre, and Jordan Brandenburg scored winning runs. “Our guys are getting better each time out and getting used to playing with one another. We are looking to finish our season the right way over the last 4 games,” said Coach Baumgartner.