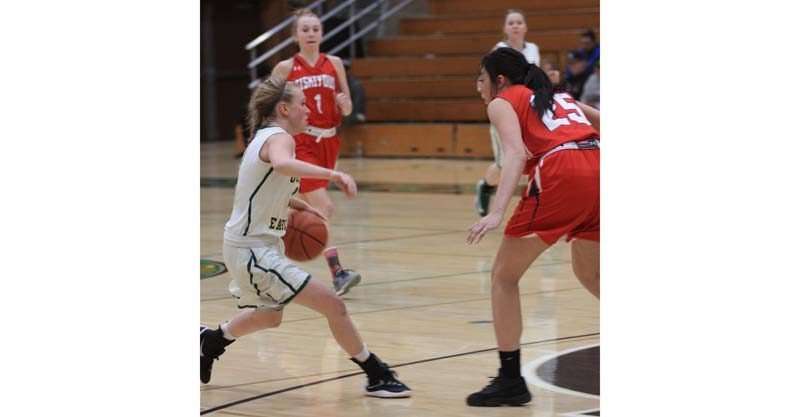 Savannah Cox looks to advance past a College of the Siskiyous player during a game last season at FRC. Photos by Jake Jacobson
Sports
January 6, 2017January 3, 2017 Jake Jacobson, Sports Editor

Both the men’s and women’s basketball teams at Feather River College are coming off of a tough tournament schedule and are set to begin Golden Valley Conference play this week.

The FRC men’s team, coached by Randy Rick, is currently ranked 12th in the state. The Golden Eagles played in the Championship game in four out of the five tournaments they competed in, including two tournament wins at the Chabot Tournament and the Cosumnes River Tournament, to end the preseason with a 13-3 record.

After a very impressive season last year, with an overall record of 27-2 and an undefeated GVC run at 10-0, this 2016-17 team has even higher hopes.

Though the team suffered major losses to graduation in Nick Longmire and Cedric Christian, now sophomore standouts Anthony Smith and Chris McDonald have taken over the team.

McDonald, who is averaging 14.4 points per game, has started all 16 games this season and is expected to continue to lead the team going into conference play.

Smith, who was an outstanding player as a freshman, is already bringing the boom early on in his sophomore year. Smith leads the team with 22.3 points per game.

The big story from last season was point guard Derrick Randolph lighting up the scoreboard against every opponent the Golden Eagles faced off against. Randolph led the state in multiple categories last season, but due to an injury, the sophomore guard has yet to step foot in a game this season.

Another standout for FRC this season is freshman Lamous Brown. Brown is currently fourth in the state in blocks with 30. The 7-footer from Chicago is making a statement his first year on campus. Brown already has established himself as a dominant big man and is expected to continue his success in conference play.

The Golden Eagles conference schedule begins on Saturday with a home game against rival Butte College at 6 p.m.

The FRC women’s basketball team, headed by Brent Stephens, is eager to take its 7-9 record into conference play.

Replacing graduates Cierra Miles and Catherine Rees could prove to be difficult for the FRC women, but returning starters Savannah Cox and Brooke House are expected to bring their experience to the team.

Though young, this Feather River team is not to be taken lightly. The Golden Eagles are set to begin the 2017 conference schedule with a home game against Butte College on Saturday at 4 p.m.